Loyalists on Brexit: ‘A one-way route to an economic united Ireland’

Loyalists in Belfast are saying "there's a lot of anger" over the Irish sea border but how that will express is still an unknown among the community. Video: Enda O'Dowd 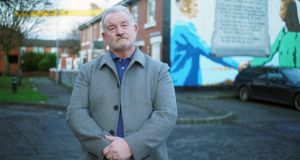 Jim Wilson: 'This isn’t what I signed up for: to be told by the British government to just ‘suck it up, and too bad this is the way it is going to be’.' Photograph: Enda O’Dowd

In the distance over Jim Wilson’s shoulder stand the famous yellow Harland and Wolff shipyard cranes Samson and Goliath, symbols on the landscape reflecting Belfast’s one-time economic might.

Directly behind him is the only loyalist mural in Northern Ireland – in east Belfast – paired with another in the nearby nationalist Short Strand.

Wilson, a former loyalist paramilitary in the Red Hand Commandos, is now a community worker committed to peace, and proud of the mural and the journey it represents.

The murals depict two children, one Wilson’s grandson and the other the niece of a former Sinn Féin deputy lord mayor. The children are reaching out to shake hands in the murals, based on a poem called No More. The message is clear: the next generation wants no part in the violence of the past.

This mural was unveiled 10 years ago, but the recent political ructions caused by Brexit in the North have stirred new concerns and tensions within the loyalist community, particularly among the younger generation.

Loyalists oppose a trade border in the Irish Sea, the compromise agreed by British prime minister Boris Johnson and the EU in October that paves the way for the UK’s orderly departure from the EU on Friday.

Loyalists see the new border in symbolic terms as eroding their political identity as unionists and British subjects of the crown.

They see the new customs and regulatory frontier on the Irish Sea not as London, Dublin and Brussels see it – a compromise to avoid a hard Irish land Border that could have sparked republican anger and potentially violence – but as a step to Irish economic unity.

For this they blame Johnson, who vowed at the DUP conference in 2018 not to create any economic barriers in the Irish Sea. Their anger is not helped by the confused messages from Johnson and UK officials about the checks required on goods moving between the North and Britain after Brexit.

Days after Johnson said there would “emphatically” be no checks on trade across the Irish Sea, the EU’s chief Brexit negotiator Michel Barnier, on a visit to Belfast on Monday, said checks on goods entering the North from Britain were “indispensable” consequences of the deal.

Wilson says there is “a lot of anger” in the loyalist community that Johnson “totally betrayed” the British people of Northern Ireland.

“This isn’t what I signed up for: to be told by the British government to just ‘suck it up, and too bad this is the way it is going to be’.”

After the deal was unveiled in October a series of public meetings and rallies brought together a broad sweep of unionists and loyalists to protest against the deal they call the “betrayal act”.

Wilson says Johnson’s deal was a “complete somersault”, and “the ultimate sell-out” which breaches the 1998 Belfast Agreement that underpins the peace process.

“Economically he is tying us to the Irish Republic, which is in the EU. It might seem like it is the EU but that’s not the way the loyalist people look at it: they look at it as we are being tied to an economic united Ireland, which was not in the Good Friday agreement.”

Wilson fears a repeat of the 2012-13 flag protests when loyalists protested over the limited number of days the union flag was flown over Belfast’s City Hall. He said the protests left hundreds of young Loyalists with criminal records that hurt their future prospects.

“Those sort of things are not realistic anymore. I would hope that there are a few things up our sleeves that we could do, but I wouldn’t want to divulge it now. It is hard to explain how you feel when you have been betrayed by your own prime minister.”

The former member of Red Hand Commando – a group affiliated with the Ulster Volunteer Force that was responsible for 500 murders in the Troubles – is clear there is “no appetite” to return to the violence of the past.

However, Wilson is fearful of the impact of the “armchair generals” and “Facebook warriors” provoking the anger of younger loyalists via well-followed social media channels, some of which are saying “we will not be the generation to fail Northern Ireland”.

“I couldn’t tell you where it’s going to go, to tell you the truth,” Wilson says.

Earlier, Wilson had shared his concerns on how Brexit might be used by some criminal elements within the loyalist community during a talk on post-conflict Northern Ireland with a group of US students hosted by Queen’s University.

Some in the loyalist community would “saber-rattle”, he warned, speaking alongside Sinn Féin Belfast city councillor and republican Séanna Walsh, who famously read out the IRA statement announcing the end of its armed campaign.

“This is not about their loyalism or their Britishness. This about giving them a reason to exist so that they can turn around and can continue to do their drug-dealing, their gangsterism, their money-lending.” These people would “love nothing better than a conflict to start up again because it will mask what they are doing”.

He said “loyalism is not in a good place at the moment”.

East of Belfast on Bangor’s loyalist Kilcooley estate – one of the biggest in the North – Alison Blayney, who runs the Kilcooley Women’s Centre (part-funded with EU money), says younger loyalists who are active on social media are “hopping mad” and feel “hugely betrayed” over the Brexit deal, which they see as “a one-way route to an economic united Ireland”.

She does not believe there will be violence from the loyalist community in response to it: she feels people are “passed that stage” and “wise to the fact that it doesn’t achieve what it used to”.

“They are moving towards thinking things through, thinking their politics through, but how they channel that I am not sure. It is a worrying time because I think they won’t accept it.”

Blayney is hopeful that the EU and UK can tweak the Irish Sea border arrangements in this year’s trade talks, but she warns against the “dangerous words” being used on the checks.

“It’s dangerous terminology because no one really understands what is going to happen because there are different messages coming out.”

At Ledley Hall Boys and Girls Club in east Belfast, young loyalists are worried that Sinn Féin is trying to take advantage of the divisions over Brexit in the North to push for a Border poll on Irish unity. The party has pledged to secure a poll within five years as one of its manifesto promises south of the Border in the run-up to the February 8th general election.

This, as loyalists see it, will inevitably cause tensions between the North’s two communities. “Sinn Féin’s election posters will be ‘we got the sea border, next we are going for the Border poll.’ We will be reminded of it every day,” said one of the youth club’s workers, who only wanted to be identified as ‘KC’.

“Anything that we take as a win they take as a loss, so if they are taking it as a win we will be wary of it.”

“The words ‘united Ireland’ to a unionist or a loyalist is just petrifying because you have been told by your granny growing up, ‘it is never going to happen, not in your lifetime’, and now it possibly could,” he said.

Wayne Gilmour (25), a self-declared loyalist activist from a working-class background who was a regular demonstrator in the flags protests, sees the Brexit deal as in effect giving Northern Ireland as “a delayed gift to the South”.

He said it has created “great mistrust”, and fed “the paranoia and siege mentality” among loyalists-unionists.

“I know people that would never have been political, wouldn’t have been openly hardline about anything, and they are falling into the fringes,” he said, sitting in a community office in the loyalist Tiger’s Bay area of north Belfast.

Loyalists are angered by Taoiseach Leo Varadkar’s failure to take account of their community’s views or worries during the Brexit process. Gilmour was incensed by Varadkar’s comments in October that people in the North would still be able to post letters in red postboxes after the Brexit deal.

“Who does he think he is? The arrogance is unbelievable. He is the representative of a foreign state; he shouldn’t have any say in the affairs of our state at all.”

Although Gilmour is not suggesting violence as a means to oppose the deal, he said he could understand why it is seen as a possibility given that the compromise deal came about in response to the “threat of violence from Irish republicanism” over a potential hard land Border.

“It would be foolhardy and naive of the British government to mistake or think that loyalism will be quietly pushed into a corner, and will be pacified and accept the deal as it is,” he said, anticipating “mass protests” from the likes of the Orange Order and other bodies opposed to it.

Gilmour says Loyalists are “stuck between a rock and a hard place at the moment”, and that “any deal that dilutes the sovereignty of Northern Ireland will be resisted”.

He says he is too young to have experienced the height of the Troubles, but is fearful of a possible return to violence.

“I fear the night when you hear the rumble and you know what’s happened. It is that sinking feeling. It is just shared among the loyalist community at the moment; there’s a feeling of despair that it is going backwards and we can’t stop it.”

He says violence is horrible and wrong, but he warns of a “strange duality” within loyalism.

“If it does fall backwards you are going to have to do what you can to protect your people’s birthright. If the state can’t do it, you do it.

“That in-built sense, that I know it’s not normal to have, but that lies in the back of your head: what if? What are you prepared to do? And no one should be asking themselves that, but we feel that neglected and pushed.”

1 Parties to continue talks with Sinn Féin despite Drew Harris’s IRA comments
2 The view from Clondalkin: If Sinn Féin don’t get in, ‘there will be marches’
3 Drug dealer loses codes for €53.6m bitcoin accounts
4 L’Arche founder implicated in sexual abuse of women
5 Ryanair’s Michael O’Leary under fire for comments on Muslim men
Real news has value SUBSCRIBE