Gambia protesters charged with treason after calling for president’s resignation 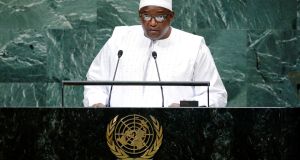 Protesters in The Gambia have been charged with treason after they were arrested calling for president Adama Barrow to step down after an agreed three-year term.

Mr Barrow – a former Argos security guard – was elected in 2016 in a shock ousting of long-ruling dictator Yahya Jammeh. Mr Jammeh had been in power for 22 years, and was known for both his eccentricity and brutality. Mr Barrow initially pledged to leave power this month, but is now saying the country’s constitution requires him to serve a five-year term.

Protests were organised by a movement called Three Years Jotna, which translates as “enough” in the Wolof language. On Sunday, police fired teargas at protesters marching towards the centre of capital city Banjul. In total 137 people were arrested, including journalists.

“The Gambian government has made so much progress on the road to democracy and has such international goodwill behind it, that it’s really painful and disappointing to see it employ these kinds of heavy-handed tactics that have no place in the kind of Gambia everyone wants to create,” said Reed Brody, an American human rights lawyer who has been involved in the campaign ‘“Jammeh2Justice’”, which aims to have the former dictator held responsible for alleged atrocities.

Saikou Jammeh, the secretary general of the Gambian Press Union, told The Irish Times on Wednesday that life was going on normally again, though there was a heavy security presence.

“How people feel about this depends on who you talk to, really. A lot of people feel disappointed in the government for its heavy-handedness, but there are people who think that it is necessary,” he said.

The protests have taken more than a year of planning and mobilising, and protesters seem keen to carry on, despite their leaders being arrested, he added.

“But the government has no less determination. They’ve not only sponsored a counter-protest and movement but have now declared the anti-government protest movement subversive and warned against businesses and media having anything to do with them.”

Saikou Jammeh said continuing with a trial against those arrested would be a big risk for the government, and “if government loses – and there’s a chance for that given how the courts are zealous to claim long lost independence and restore public confidence – it may embolden the protesters and weaken the position of the government”.

In December, The Gambia’s Truth and Reconciliation Commission finished a year of televised hearings that had focused on abuses by the former dictator, Mr Jammeh, including murders, torture, and even state-sponsored witch hunts.

Mr Jammeh has been in exile in Equatorial Guinea since early 2017, and the current government says he will be arrested if he returns.