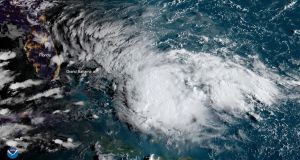 A handout photo made available by the National Oceanic and Atmospheric Administration shows a satellite image of a tropical depression moving northwestward over the southwest Atlantic Ocean on Friday. Photograph: EPA

A tropical depression near the Bahamas has strengthened into Tropical Storm Humberto.

Parts of the north-western Bahamas that were recently pummelled by Hurricane Dorian are expected to experience tropical-storm-force winds and heavy rain over the weekend, but not significant storm surge.

The US National Hurricane Centre said early on Saturday that the storm was located about 160km east-southeast of Great Abaco Island and moving north west at 10km/h.

It had maximum sustained winds of 64km/h.

A tropical storm warning is in effect for the north-western Bahamas, excluding Andros Island.

Forecasters expect the storm to stay offshore of Florida’s eastern coast, so a tropical storm watch is no longer in effect for the state. – PA