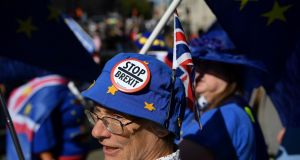 Anti-Brexit activists wave EU flags whilst draped in Union flags as they demonstrate outside the Houses of Parliament in London on Thursday. Photograph: Getty Images

Claiming a no-deal Brexit represents a clean break with the European Union is “nonsensical”, according to Philip Rycroft, the former permanent secretary at the Department for Exiting the EU.

Boris Johnson has promised to extricate the UK from the EU on October 31st “come what may” – and has hinted that he could try to get around legislation mandating him to request a Brexit delay.

The Brexit party leader, Nigel Farage, whose party trounced the Tories in May’s European elections, has been urging the PM to deliver a “clean break Brexit” by leaving without a deal.

But Rycroft, who was the most senior civil servant at DexEU until March this year, told the Guardian a no-deal Brexit would mark the beginning of a complex series of negotiations.

“And because of the importance of those ties both for the EU and the UK, it will remain hugely important to have those expressed through a formal relationship. In other words, we’re going to have to negotiate – and that negotiation on the future relationship starts with citizens, money and the Border on the island of Ireland.

“So the notion that no deal somehow means that we can turn our backs on the EU and break all our ties is just nonsensical.”

Mr Rycroft spent part of his career at the Scottish Office and in the Scottish Executive before working in Nick Clegg’s office during the Tory-Lib Dem coalition government, and helping to coordinate Whitehall’s approach to devolution from the Cabinet Office.

He gave a speech on Monday warning that politicians should be thinking carefully about how to protect the union with Scotland and Northern Ireland after Brexit – deal or no deal.

“Clearly at the moment, political time has collapsed: everything has become very short term, everyone’s worrying about what’s happening not even next week but tomorrow,” he said. “In those circumstances it’s very different to be lifting their eyes to a more distant horizon. How do we manage as a country, if and when we come out of the EU?”

After this week’s renewed clashes between Johnson’s government and rebel MPs and the judiciary, Mr Rycroft said it may be time to think about whether Britain’s constitution is working – a question also raised by the Speaker, John Bercow, on Thursday.

“I would agree with those who would say in these circumstances, it may not be that you’d need a written constitution as a whole, but as a minimum, some of the procedures, not least in the Houses of Parliament, are going to have to be codified for clarity on what the rules are. There is no doubt in my mind that we have reached that point.”

Mr Rycroft is about to take up a post at the University of Cambridge as a distinguished honorary researcher at the Bennett Institute for Public Policy and the department for politics and internal studies.

He warned against the growing tendency in public debate to denigrate civil servants and blame them for the failings of their political masters.

“Civil servants do their job for governments of the day, delivering the policies of the government of the day, and that’s just as true for Brexit as for anything else.” He said claims his erstwhile colleague Olly Robbins had sought to stymie the government’s negotiating efforts were “complete nonsense”.

Mr Robbins left Whitehall as Johnson took over and it emerged recently that he had taken a job at the investment bank Goldman Sachs. – Guardian