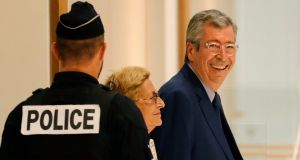 Isabelle Balkany, the 71-year-old deputy mayor of the affluent Paris suburb of Levallois-Perret, faltered as she approached the bench and asked permission to remain seated. Her husband, Levallois mayor Patrick Balkany, also aged 71, stood alone to take the full blow of the verdict in the couple’s trial for tax fraud.

“The infractions of which the Balkany spouses made themselves guilty gravely affected the public and economic order and worsened the now old tear in the republican pact,” the judge read.

The couple are members of the conservative party Les Républicains, and governed Levallois as their private fiefdom for the past 36 years. They “deliberately resolved to methodically hide the real extent of their fortune from the tax administration through sophisticated devices”, the court heard.

Mr Balkany was sentenced to four years in prison, with a committal order and 10 years of ineligibility for public office. Ms Balkany received a three-year prison sentence, but without a committal order. She was also banned from public office for 10 years. She tried to take her own life before their trial opened in May.

Mr Balkany was escorted to La Santé prison in southern Paris after sentencing. The couple’s son Alexandre accompanied Ms Balkany to their home in Levallois.

Before they were separated in the courtroom, Ms Balkany rushed to her husband and threw her arms around him. “I am overwhelmed, wounded, sad and worried,” she told BFM television.

Mr Balkany’s lawyer, Éric Dupond-Moretti, said the couple would appeal. “What shocks me most is the committal order, which is a totally useless, unbearable humiliation,” he said. “I think they are making fun of Balkany.”

Ms Balkany’s lawyer, Pierre-Olivier Sur, said she was in the grip of “total, absolute, unbearable emotion”.

The Balkanys were convicted on Friday of failing to pay the wealth tax on a fortune surpassing €16 million between 2010 and 2015, and for evading more than €4 million in wealth and income taxes between 2009 and 2015.

The Balkanys own a millhouse in the picturesque village of Giverny, a villa called Pamplemousse on the Caribbean island of St Martin, and a riad in Marrakech, which they hid from the taxman through a series of front companies.

Mr Balkany is expected to spend at least 10 days in a prison ward reserved for vulnerable persons.

A second verdict, on corruption and money laundering, will be handed down on October 18th. The couple’s former staff testified that they were awash in cash.