US Politics: There is no future for a GOP that fails to address public qualms about capitalism 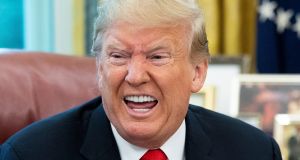 US president Donald Trump participates in a briefing on Hurricane Dorian in the Oval Office of the White House on Wednesday. Photograph: Michael Reynolds/EPA

The US senator Elizabeth Warren scolds herself for playing up her Native American ancestry. Former vice-president Joe Biden regrets his unsolicited tactility with women. Pete Buttigieg deplores his own record on policing and race as the mayor of South Bend, Indiana. In a confessional culture, one given to Instagrammed waffle about personal “growth”, even those who aspire to govern reproach themselves in public.

Republicans are not exempt. Joe Walsh, Donald Trump’s new rival for his party’s 2020 presidential nod, is busy renouncing old statements. Exactly which ones, though, are telling. For doubting Barack Obama’s birth on terra Americana, the former congressman is duly contrite. For tweeting that “taxation is theft”, which he did as recently as February, he is hardly even challenged.

Walsh will be made short work of, but his candidacy illuminates the problem with anti-Trump conservatives. Yes, they have numbers. Even some who work with or for the president, hope to fumigate the party of his influence one day. Their struggle is of global consequence: at stake is the future of a major party in the world’s most important nation.

It matters, then, that their analysis is so incomplete. These dissenters tend to believe that it is enough to wind down Trump’s culture wars. The party of their dreams would be kinder to immigrants and minorities. It would favour democratic countries over autocracies and restore a measure of decorum to a sullied White House. It would act much like the GOP of 2012, or 1996, or 1984.

But that party broke down for a reason. Its near-evangelical commitment to markets chimed less and less with working class voters. And on that question – the distributional question of economics – Trump’s Republican enemies are amazingly unreflective.

History has been trying to tell the GOP something for a while now. When George W Bush became the first, and so far only, Republican to win the presidential popular vote since the end of the cold war, he did so as a war leader, not a libertarian. The previous year, 2003, he passed the largest welfare entitlement since the 1960s. The beginning of the end of his presidency was an attempted meddling with social security.

If that was not enough of a clue, the Tea Party then erupted, with its highly selective hostility to government. Means-tested benefits for the poor: bad. Universal ones, such as Medicare: precious. The conservative id was becoming more populist than capitalist.

When the GOP succumbed, it was to a trade-hater who promised to leave the fundamentals of the welfare state alone. His rise occurred on the watch of Chamber of Commerce Republicans Mitt Romney and Paul Ryan, for whom almost all of government was negotiable.

The lesson here is unmistakable – or it should be. There is more to conservatism, and to winning elections, than laissez-faire. A return to a Romney-Ryan party would, in ethical terms, be better than the slightly feral GOP of today. But it would also, before long, give rise to another version of Trump, perhaps a better one, willing to not just talk beguilingly about big-government conservatism, but to enact it in office.

There is no future GOP that does not give some quarter to public qualms about capitalism. Better manners are not enough. A redoubled commitment to Nato is not enough. It is going to take some intellectual, and even emotional, discomfort for conservatives who have only ever known the crusade against Leviathan.

Another mooted challenger to the president, Mark Sanford, was once rated the best governor in the country – by the libertarian Cato Institute. A third, Justin Amash, co-founded the congressional Freedom Caucus, whose impoverished idea of freedom is minimal state spending.

All these people have useful things to say: about civility, the dignity of public office, the value of foreign allies. But they espouse the old economics that gave Trump something to define himself against. Note that some Republican dissidents only spoke up after his own heresies against trade. They do have their standards, you see.

Talleyrand’s distinction between crimes and mistakes is pertinent. Trump’s worst crime is his aggravating role in the American Kulturkampf. But his worst mistake was to threaten Obamacare without offering a replacement, or to spend more legislative time on tax cuts than infrastructure.

These were vote-losers from which he has never recovered. He campaigned as an economic populist. Tariffs aside, he has governed as an unreconstructed supply-sider. His enemies cannot rebuild the party with the same dogma. – Copyright The Financial Times Limited 2019