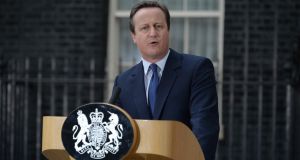 Former UK prime minister David Cameron has admitted that he failed in his bid to keep Britain in a reformed European Union and is “truly sorry” for the uncertainty and division that followed the Brexit referendum.

The Conservative (52) said he thinks about the consequences of the vote to leave the EU “every single day” and worries “desperately” about what will happen next.

In an interview with the Times ahead of the publication of his memoir next week, Mr Cameron also said a second referendum cannot be ruled out - suggesting it could provide a way of “unblocking the blockage”.

And he attacked Boris Johnson and Michael Gove for their part in the Leave campaign, accusing the pair of behaving “appallingly” and effectively “trashing” the Government.

Mr Cameron also said they had “left the truth at home” regarding Turkey joining the EU and the claim that Britain sends £350 million a week to the bloc.

In his long-awaited book, For The Record, which is serialised in The Times, the ex-PM wrote that “there are those who will never forgive me for holding it, or for failing to deliver the outcome - Britain staying in a reformed EU - that I sought.

“I deeply regret the outcome and accept that my approach failed. The decisions I took contributed to that failure. I failed.”

He admitted that he has “many regrets” and that there are “many things” he would do differently about the vote, but insisted renegotiating Britain’s relationship with the EU and giving the country a say was the “right approach”.

‘I am truly sorry’

“I did not fully anticipate the strength of feeling that would be unleashed both during the referendum and afterwards, and I am truly sorry to have seen the country I love so much suffer uncertainty and division in the years since then,” Mr Cameron said.

“But on the central question of whether it was right to renegotiate Britain’s relationship with the EU and give people the chance to have their say on it, my view remains that this was the right approach to take.

“I believe that, particularly with the Eurozone crisis, the organisation was changing before our very eyes, and our already precarious place in it was becoming harder to sustain.

“Renegotiating our position was my attempt to address that, and putting the outcome to a public vote was not just fair and not just overdue, but necessary and, I believe, ultimately inevitable.”

In an interview with the paper, he also took aim at Priti Patel’s “attack that wealthy people didn’t understand the problems of immigration”.

“It felt very like she was put on point to do some attacking of the government and its record. I suppose some people would say all is fair in love and war and political campaigns.

“I thought there were places Conservatives wouldn’t go against each other. And they did.”

And he revealed that he once texted Mr Gove, now Chancellor of the Duchy of Lancaster, to say: “You are either a team player or a w**ker.”

Mr Cameron also confessed that he got “off his head” on dope while at Eton, and said he smoked it later with his wife Samantha and her friends.

The former PM - who said he had been “hugely depressed” about leaving Number 10 - described Mr Johnson as “easy to work with” but admitted that there had been “issues” between the pair.

“I want him to succeed. I worked with him well, as I say in the book. I also say that he was a capable mayor. He was easy to work with. I thought he was very talented. I wanted him in my government,” he explained.

“We’ve had issues. Even before Brexit, there were sometimes tensions and disagreements but, on the whole, we’ve got on well. And I want him to succeed.

“Look, he’s got a very clear strategy and plan. It’s, you know, not the approach that I would have taken, but I want him to succeed.”

But on the new Prime Minister’s recent decision to prorogue Parliament for five weeks and withdraw the whip from 21 Tory MPs - including the likes of Ken Clarke and Sir Nicholas Soames - Mr Cameron expressed his disapproval.

“Taking the whip from hard-working Conservative MPs and sharp practices using prorogation of Parliament have rebounded. I didn’t support either of those things. Neither do I think a no-deal Brexit is a good idea,” he said.

On Friday Mr Johnson said he was not concerned about what his predecessor would write about him in the memoir.

“I want people to be clear, absolutely nothing that David Cameron says in his memoirs in the course of the next few days will diminish the affection and respect in which I hold him.

“Not least for what he did in turning this country round after Labour left it bankrupt. I think he has a very distinguished record and a legacy to be proud of.”