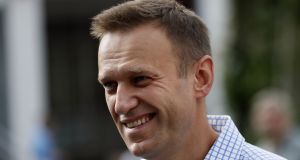 Russian police on Thursday raided the homes and offices of hundreds of associates of opposition leader Alexei Navalny in a sign that the crackdown that followed this summer’s pro-democracy demonstrations is continuing.

Mr Navalny was jailed, and later released, for calling the protests in July and August over a government decision to bar some opposition candidates from standing in the election.

The authorities first claimed that Mr Navalny’s foundation laundered one billion rubles (€13.5 million) in illicit funds from unnamed third parties, which they implied had come from abroad, by accepting cash payments to fund its investigative work. The authorities later revised the alleged amount to an unspecified large sum.

Mr Navalny’s supporters said the money-laundering allegations were a reprisal for his political campaign against Mr Putin and that the sum the foundation was accused of laundering vastly exceeded the donations it had received.

Leonid Volkov, the foundation’s chief of staff, said on Thursday police had confiscated equipment, cell phones, documents and funds belonging to employees and volunteers. Writing on the Russian messaging service, Telegram, he wrote: “To frighten and to steal – these are the two tasks the state has set for itself. Not only with regard to Navalny offices by the way! Clearly the aim of this whole operation is to destroy the office structure, to halt their work. We will not let this happen,” he said.

“It will not be very easy to resume the organisation’s work. But we shall manage within a couple of weeks without losing a single branch or a single employee,” Mr Volkov added.

Mr Navalny, the most prominent opposition leader, was barred from running against Vladimir Putin in the presidential elections last year. – Copyright The Financial Times Limited 2019