Move aims to end months of political uncertainty and scandal 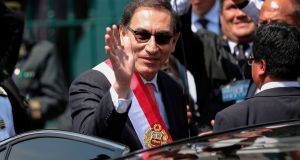 Peru’s incoming president Martin Vizcarra will replace the country’s prime minister in a bid to form a consensus government with input from a broad representation of political groups and institutions, two sources close to Mr Vizcarra said.

Prime minister Mercedes Araoz will remain in her other position as vice president, the two sources and a third source close to Ms Araoz said on Thursday. Ms Araoz had previously vowed to resign the vice presidency out of loyalty to outgoing president Pedro Pablo Kuczynski if congress forced him from office.

Mr Vizcarra and Ms Araoz did not immediately respond to requests for comment. Mr Kuczynski tendered his resignation to congress on Wednesday as an 11th-hour vote-buying scandal destroyed his chances of surviving an impeachment vote and prompted a criminal investigation. He denies any wrongdoing.

The move rallied markets, amid hopes that it would end months of political uncertainty in the top metals exporter. But Mr Kuczynski’s bitter battle with the opposition has fractured political parties, eroded trust in elected officials and sparked calls for new elections.

Mr Vizcarra, first in line to replace Mr Kuczynski as the country’s first vice president, will be sworn in on Friday. In a bid to restore credibility in institutions while averting a fresh crisis.

Mr Vizcarra will ask different political and civil society groups to weigh in on important decisions, starting with a new cabinet, the sources close to him said. The sources close to Mr Vizcarra said it was not clear if he would keep any ministers in the cabinet beyond a transitional period to ensure the government runs smoothly. But they said Mr Vizcarra definitely plans to replace Ms Araoz, who has faced harsh criticism from lawmakers on the right and left as she has fought to help Mr Kuczynski survive. Having her remain outside the cabinet, as one of Peru’s two vice presidents, would give Mr Vizcarra and Peru more stability, the three sources said.

The source close to Ms Araoz said she had decided to remain as vice president because Mr Kuczynski was departing voluntarily, not through a vote she would have considered a legislative coup.

Mr Vizcarra and Ms Araoz were elected together with Mr Kuczynski in 2016, when they narrowly beat the presidential ticket of rightwing candidate Keiko Fujimori, the eldest daughter of former authoritarian president Alberto Fujimori. Despite losing the presidency, Fujimori’s party won control of congress and forced at least three ministers in Mr Kuczynski’s government to resign. Fujimori’s party has promised to allow Mr Vizcarra to govern Peru in peace through the rest of Mr Kuczynski’s scheduled term to 2021.

Mr Vizcarra will arrive in Lima early on Friday from Canada, where he has doubled as Peru’s ambassador.