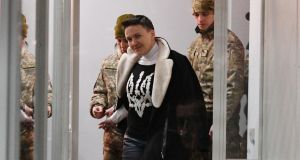 Nadiya Savchenko on Friday. Ms Savchenko declared a hunger strike after she was detained over accusations she plotted a terrorist attack in Kiev. Photograph: Genya Savilov/AFP/Getty Images

Ukrainian president Petro Poroshenko has hailed the nation’s security services for foiling an alleged Russian-backed coup plot involving celebrated ex-military pilot and deputy Nadiya Savchenko, who has gone on hunger strike in protest at her arrest.

A Kiev court remanded Ms Savchenko in custody after she was detained in parliament on charges of planning to kill Mr Poroshenko and seize power, using arms from Moscow-led separatists who control parts of eastern Ukraine.

Ms Savchenko says the charges are politically motivated, but she has repeatedly called for the removal of Mr Poroshenko and his allies for their alleged corruption and failure to fulfil reform pledges made after Ukraine’s 2014 revolution.

The case comes less than two years after Ms Savchenko returned home to great fanfare from Russia, where she was convicted of murder in a show trial following her capture during fighting in eastern Ukraine in 2014. Mr Poroshenko granted her their country’s highest award, the “Hero of Ukraine” medal.

Ms Savchenko has launched a hunger strike, as she did in Russia, saying she would “again show all the unbelievers. I will show the Ukrainian people what a hero is.”

The SBU’s work in both cases was “worthy of pages in textbooks for future special service agents,” Mr Poroshenko said on Saturday.

“You masterfully uncovered the enemy nest that planned major terrorist attacks with many victims in Kiev...and an uprising in Ukraine in the interests of the Russian Federation,” he added of Ms Savchenko’s case.

Surveillance recordings purportedly show Ms Savchenko discussing how to kill Ukraine’s leaders and attack parliament with mortars, grenades and guns. She allegedly conspired with Volodymyr Ruban, who had been hailed for negotiating prisoner exchanges in the east before his arrest. He denies wrongdoing.

Footage from a camera hidden in Mr Ruban’s van allegedly revealed his visits to bases in separatist-held territory to collect arms from Russian military officers.

Kremlin spokesman Dmitry Peskov said any claim of Russian involvement was “probably a theory of the British” – a reference to London’s belief that Moscow is behind the poisoning of ex-spy Sergei Skripal and his daughter Yulia in Salisbury.

Ms Savchenko says her suspect conversations and transport of arms were part of her own covert operation to infiltrate separatist circles, investigate weapons flows in the east and expose scheming officials.

Mr Poroshenko called the alleged coup plots evidence that Russia was pushing its “hybrid war” into the heart of Kiev.