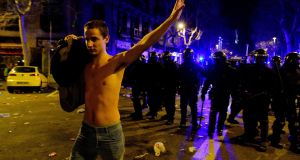 A protester gestures as he walks past riot police officers during clashes at a demonstration in Barcelona on Sunday night after Catalonia’s former president was arrested by German police. Photograph: Luis Gene/AFP/Getty Images

Riot police clashed with protesters on Sunday evening in Barcelona, hours after ex-Catalan president Carles Puigdemont was detained near the German-Danish border.

Around 55,000 pro-independence marchers took to the streets of the Catalan capital to show their support for the 55-year-old and to protest his arrest. A separate protest was held in Girona, where Mr Puigdemont served as mayor.

The situation in Barcelona escalated in the evening as protesters fought running battles with riot police. Local authorities reported dozens of injuries and many arrests. In videos posted on a Spanish news website, police used their batons and appeared to fire warning shots.

Mr Puigdemont was en route from Finland to Belgium, his self-imposed home-in-exile for the last five months, when he was detained shortly after 11am at an Autobahn petrol station near the northern town of Schleswig.

The separatist leader was in custody on Sunday night while German authorities weigh up a European arrest warrant (EWA) from Spain on charges of rebellion, sedition and embezzlement.

German media reports say Spanish intelligence tipped off German police that he had crossed the border from Denmark.

Berlin faces a political dilemma with uncomfortable historical overtones after the arrest on Sunday morning.

Mr Puigdemont is wanted in Spain on charges of rebellion and sedition arising from his role in organising an October referendum on Catalan independence. He faces a 30-year prison sentence if convicted.

News of the arrest in Germany caused uproar in Catalonia, which declared independence after a referendum dismissed as unconstitutional by Madrid, which then imposed direct rule.

On social media, Catalonians likened the detention of Mr Puigdemont to the arrest of leftist Catalan president Lluis Companys by the Gestapo. They extradited Mr Companys to Franco’s Spain in 1940, where he was held in solitary confinement, tortured and eventually executed by firing squad.

“If Germany collaborates with the Spanish authoritarian government,” wrote one Twitter user, “Europe will be dead.”

Spain reactivated its arrest warrant on Friday, while Mr Puigdemont was in Finland delivering a lecture. His attorney, Jaume Alonso-Cuevillas, said Mr Puigdemont had left Finland and was en route to Belgium “where he had intended to put himself, as always, at the disposal of the Belgian justice system”.

Ralph Döpper, deputy state prosecutor in Schleswig-Holstein, confirmed the politician was in police custody while authorities decided whether to act on the warrant.

He said the decision whether to extradite him to Spain, or release him, would probably come on Monday.

“We are at the start of the examination process,” said Mr Döpper.

He gave no information on how it came to the detention of Mr Puigdemont and four others, and how Autobahn police knew where to find them.

“We simply had the information that he was supposed to be in Germany or had entered the country,” he said.

The ex-politician is reportedly being held in a prison in the town of Neumünster, an hour north of Hamburg.

His detention has seriously ratcheted up tensions in Catalonia, where separatists hold a majority in the regional parliament after elections in December. They have failed to form a government and have abandoned plans to name a new president following the arrest of their latest candidate, Jordi Turull.

Mr Puigdemont had sought to be sworn in and rule from Belgium via video conference, but abandoned his bid on March 1st with “the greatest sadness”. In a video message he insisted he would not abandon the idea of setting up a government in exile.

“I will not throw in the towel. I will not quit. I will not give up in the face of the illegitimate behaviour of those who lost at the ballot box,” he said. In leaked private conversations with colleagues in Barcelona, however, he appeared to admit defeat and acknowledge that Madrid “has won”.

Under the rules of the EWA, active since 2004, a court in one EU member state can only extradite a person sought by another member state if they are confident the suspect will face equivalent fair legal procedures and trial.