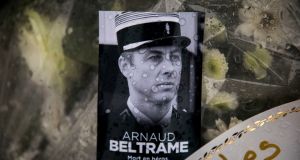 A photograph of Lieut-Col Arnaud Beltrame on a bunch of flowers at the main gate of police headquarters in Carcassonne, France, on Saturday. Photograph: AP Photo/Emilio Morenatti

A memorial service has been held for the four victims of the terrorist shooting spree and supermarket hostage-taking in southern France, as police continued to question two teenagers about the gunman who claimed allegiance to Isis.

The Catholic service in the small town of Trèbes near Carcassonne was attended by church leaders and local imams as well as mourners, survivors and rescue workers. The bishop of Carcassonne and Narbonne, Alain Planet, called for community cohesion and the courage “to rebuild a society where events like this would no longer be possible”.

A national memorial organised by the government will be held at a later date for gendarme Lieut Col Arnaud Beltrame (45), who died from bullet and stab wounds after taking the place of supermarket hostages the gunman Radouane Lakdim (25) had used as a human shield during the attack on Friday.

After the interior minister Gerard Collomb said he believed Lakdim had acted alone, on Sunday police were continuing to question a 17-year-old as well as Lakdim’s 18-year-old girlfriend.

It emerged that the gunman had also brought homemade explosives into the supermarket where he took customers hostage.

Lakdim, a smalltime drug-dealer who had French nationality and was born in Morocco, had left a handwritten letter at his home pledging allegiance to Isis, according to a legal source. Despite being on a watchlist for people considered potential extremists and having been under surveillance for potential radicalisation in 2016 and 2017, Lakdim carried out the armed attacks on Friday not far from his home in the picturesque town of Carcassonne.

French president Emmanuel Macron, responding to the worst jihadist attack since he took office last year, has called an urgent meeting this week of the security services responsible for monitoring individuals suspected of radicalisation.

On Friday morning in Carcassonne, Lakdim first approached a parked Opel Corsa, wounded the driver and shot dead its passenger Jean Mazieres (61), a wine-maker from a local village who had just retired.

Lakdim took the car Mazieres had been sitting in and drove towards military and police barracks, shooting at four police officers returning from a jog, seriously injuring one of them.

He then drove to a Super U supermarket in Trèbes, armed with a gun, knife and explosives, opening fire as he walked in, shouting that he was a soldier from Isis. In front of terrified staff, Lakdim immediately shot dead Christian Medves (50), a butcher in charge of the meat counter.

Lakdim then shot dead a pensioner, Herve Sosna (65), who was making his way to the checkouts to pay for his shopping. ”

The hostage-taking lasted over three hours. Police, after hearing shots, finally stormed the supermarket where Lakdim had been left holding only Beltrame. Beltrame died later from his injuries.

A further 16 people were injured in the attacks. The shooting spree is the first major attack since Mr Macron lifted France’s state of emergency and toughened anti-terrorism laws last autumn.

In a TV address Mr Macron declared: “Our country has suffered an Islamist terrorist attack.”