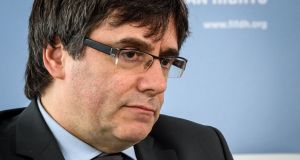 Police in the northern state of Schleswig-Holstein said highway police arrested Mr Puigdemont on Sunday morning near the A7 main road that leads from Denmark into Germany.

They said “Mr Puigdemont is currently in police custody” and refused to give further details.

A Spanish Supreme Court judge charged 13 Catalan separatist politicians with rebellion on Friday for their attempts to make the region independent of Spain, dealing a heavy blow to the secessionist movement.

The judge ordered international arrest warrants for the six Catalan officials who are fugitives, including Mr Puigdemont.–PA