No end in sight to Venezuelan crisis despite daily upheaval 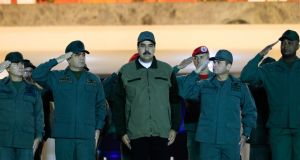 After Tuesday’s military uprising that was either stillborn, or never existed in the first place, Venezuela returned to what now passes for normal in the country’s seemingly endless political crisis.

The opposition counted its dead from two days of street clashes across the country. Four more names were added to this year’s death toll which now stands at 57. More protests were called for Thursday afternoon but Caracas was reportedly quieter than earlier in the week.

Opposition leader and self-proclaimed president Juan Guaidó told his followers to keep up the pressure by remaining in the street and mounting a series of work stoppages. But with more than 6,000 protests recorded across the country already this year maintaining non-stop pressure on the increasingly brutal dictatorship of Nicolás Maduro is proving challenging.

Maduro himself staged a military rally in Caracas early on Thursday morning, designed to demonstrate that he still has the backing of the armed forces, considered key to determining the outcome of his power struggle with the opposition.

The images of the president marching with thousands of troops are clearly designed to demonstrate that the opposition’s claims that he no longer has the support of the army are wide of the mark. But they also had the whiff of a man who doth protest too much. Among those who appeared with him was defence minister Vladimir Padrino López whom Washington claimed took part in talks about his removal in the run-up to Tuesday’s events.

Despite the fact its warning of possible military intervention against Maduro so far has failed to bear fruit the Trump administration reacted to Tuesday’s events with more sabre rattling. National security adviser John Bolton threatened Cuba with measures because of its support for Caracas while reiterating the US retains the option of military action against Caracas, a move few in the region believe wise or credible.

How has Moscow responded?

In response Russia’s foreign minister Sergey Lavrov has said Moscow is mobilising a group of countries to counter the possibility of US military action in the latest sign that Venezuela is a major new arena for US-Russian tensions. Bolton again this week invoked the controversial Monroe Doctrine specifically against what he classified as Russia’s attempt to “take over a country in the western hemisphere” either directly or through its “surrogates” in Cuba.

Meanwhile the most promising diplomatic efforts to find a solution to the crisis remain focused on the International Contact Group for Venezuela. Made up of moderate regional states and co-chaired by the European Union it has been working hard on the ground in Venezuela trying to map out the conditions necessary to get both sides in the stand-off to agree to a process that will lead to free and fair elections.

In the absence of any other meaningful diplomatic efforts that seek to bridge Venezuela’s divide, rather than just shout across it, the group’s ministerial meeting in Costa Rica on Monday and Tuesday holds out the best hope of real progress towards bringing the Venezuelan agony closer to an end.