Michigan has been an attractive destination down the years, but that is no longer the case 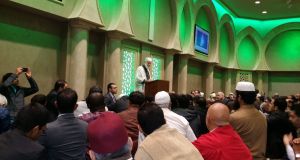 It’s a city located in the isolated upper midwest of the United States, but Flint boasts a storied connection with the Middle East.

The first Arab families, mostly Christians and Druze from Lebanon and Palestine, arrived here a century ago drawn by jobs at rapidly-expanding car manufacturing factories. Standalone immigrant businesses soon sprouted, such as the Hamady Brothers supermarket chain, established by Lebanese cousins in 1911 and which, at its height in the 1980s, employed more than 1,300 people at 37 stores across the region.

Today, many who make up Flint’s long-standing Middle Eastern community are doctors or hotel and restaurant proprietors; it’s a source of pride that research by academic Mona Hanna-Attisha, the daughter of Iraqi immigrants, first exposed the extent of the city’s water crisis in 2015.

But as much as the established community has lived out the American Dream, recent arrivals are struggling. Dozens of families, many who fled wars in Syria and Yemen and who moved to Flint to join relatives, are struggling to integrate.

While more refugees per capita have settled in Michigan than any other US state since 2015, official refugee placement programmes have avoided Flint partly because the high-point of the Syrian refugee crisis in 2015-16 coincided with Flint’s own water problems. That meant for immigrants coming to Flint independently, local, state or federal support was scant on the ground.

Najjar, who asked not to be fully identified, fled his suburban Damascus home for Flint as the uprising in Syria turned increasingly violent in 2012. “It was not a good situation, and my family has a political history in Syria,” he says. Soon after leaving for the US, his home district was attacked, surrounded and besieged by the Syrian military. He emigrated to Flint because his uncle has been living in the city since 1970.

“It’s funny, because when I landed at the airport and told the immigration officer where I was going to live, he told me go to a different city,” says Najjar with a chuckle. Flint has been wracked by job losses and socioeconomic problems for more than a decade. Soon after arriving, Najjar secured a job at a local company involving basic tasks such as printing and scanning, earning the minimum wage. He availed of food stamps to feed himself as his income then was low.

“Getting a job is difficult, especially if you’re someone like me – I was close to 41 when I started. I put my résumé everywhere, I did some interviews, but my English wasn’t good enough. It was very hard for a few months,” he says.

That Najjar had previously worked for a printing company in Syria gave him a head start in the US, he says. But many new arrivals, say community leaders, lack such workplace experience. A dearth of facilities such as easily accessible English language classes and convenient transportation, things essential to securing jobs and housing in car-centric Michigan, are other major concerns.

“There is a massive lack of resources to help with integration in Flint,” says Devin Bathish, the executive director of the Arab-American Heritage Council based in downtown Flint. “We [the heritage council] can’t provide it because we don’t have the resources or capacity. Detroit has tried to step up and work on the integration process,” he says, referring to Michigan’s largest city.

“But because of that, immigrants coming to Flint find that that they have to travel to Detroit to avail of immigration services, so now that issue of not having a car becomes significant because it’s an hour and a half to get to Detroit.”

The absence of official state or federal immigration programmes in Flint means estimating the number of Middle Eastern immigrants is also problematic. Having passed an exam to legally work as an official insurance provider – at the fourth attempt – Najjar now works as an insurance agent and studies business part-time at the University of Michigan-Flint. He has also bought a home.

He says the biggest problem immigrants face is negotiating official bureaucracy. “In Syria, if you’ve money and connections you can easily get things done. That’s not how it works here. Some [immigrants] just stay within the community and don’t learn English. It’s not easy for people who have come here; they’ve fled a war, they’re afraid that the mukhabarat [Syrian secret police] can go anywhere. So, people are often shy to ask for help.”

Concern for isolated immigrant groups in Flint has been heightened by the city’s five-year-old water crisis, involving large-scale contamination of the city’s supply. Groups such as the Arab-American Heritage Council have assisted with translation for non-English speakers, helping to warn them of the risks associated with using tap water.

Najjar is adamant his own travails shouldn’t deter others from coming to the US. “It’s not easy but you can do it. This is my message to people who are in the situation I faced,” he says. “Definitely, if you come to Flint you are going to need help, you can’t do it by yourself.”