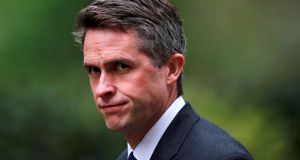 Britain’s former secretary of state for defence Gavin Williamson: has denied that he was behind the leak, claiming that a police investigation would exonerate him. Photograph: Alkis Konstantinidis/Reuters

Theresa May has rejected opposition calls to refer former defence secretary Gavin Williamson’s alleged leak from the National Security Council (NSC) to the police for a criminal investigation.

The British prime minister sacked Mr Williamson on Wednesday night, telling him there was compelling evidence that he briefed a journalist about a discussion at the NSC last week.

Labour and the Liberal Democrats said that if Mr Williamson had breached the Official Secrets Act, he should be investigated and prosecuted. But David Lidington, the prime minister’s de facto deputy, told MPs on Thursday that the government would not refer the matter to the police.

“The prime minister has said that she now considers that this matter has been closed and the cabinet secretary does not consider it necessary to refer it to the police, but we would of course co-operate fully should the police themselves consider that an investigation were necessary,” he said.

Mr Williamson has denied that he was behind the leak, claiming that a police investigation would exonerate him. But Metropolitan Police commissioner Cressida Dick said she could not consider any investigation without a referral from the government.

“If the Cabinet Office were to send us a referral at any point that related to apparent official secrets or an associated leak, we would assess that. We would scope it and we would go through a very formal gateway process before taking on any criminal investigation,” she said.

Labour’s deputy leader Tom Watson wrote to the prime minister calling on her to refer the matter to the police after he raised the issue as an urgent question in the Commons.

“Where is the justice? In what world is it acceptable that the prime minister should be an arbiter on whether a politician she believes is guilty of criminal conduct in office should face a criminal investigation?” he said.

The leak from the NSC may not have violated the Official Secrets Act because it concerned a political discussion about whether to allow Chinese telecoms company Huawei to build part of Britain’s 5G network. But Mrs May’s official spokesman said the issue was not about what was leaked but where it was leaked from and the importance of maintaining trust in the NSC.

Peter Bone was one of a small number of Conservative MPs to express support for Mr Williamson, suggesting that he had been the victim of a witch hunt.

“The former secretary of state has said that, on the lives of his children, he did not leak the information. This seems to have been a kangaroo court reaching a decision in secret which we have no evidence to base any decision on,” Mr Bone said.