‘Will we make it?’: Syrian Kurds in refugee camp face their bleakest winter

Bardarash Letter: Camp’s occupants struggle on after having lost everything 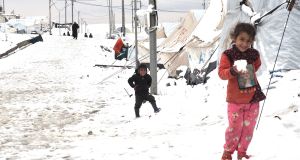 When the snow fell, the children of Bardarash refugee camp ran outside, darting in and out of the rows of tents as they threw snowballs. The entire scene – the ground, the tents and the sky – was white. For a while, everything seemed magical.

The Irish Times last visited the camp in October, as Syrian Kurds poured over the border into Iraq, fleeing Turkey’s invasion of northeast Syria. Having supported US troops in the fight against Islamic State, the Kurds in the region had been abandoned by their main ally in their greatest hour of need, left to face the bombs and bullets alone.

The attack, spearheaded by Syrian Arab proxies, was aimed at purging the borderland of Kurdish fighters linked to separatists on Turkish soil. Turkey has since started resettling some of the 3.6 million Syrian refugees it has been hosting on to the cleared territory. Critics have described the moves, which displaced more than 200,000 people, as ethnic cleansing.

Four months on, there are lots of new faces at Bardarash, which now hosts about 9,000 of the 21,000 Syrian Kurds who fled to Iraq after last year’s invasion, according to the UN refugee agency, the UNHCR.

Yazzi invites me into her tent, warm and cosy, with a steaming kettle on the kerosene heater. Her husband and mother sit on a thick carpet of UN-issue blankets. At the back of the tent, her teenage boys sleep, swaddled in sleeping bags.

Sipping chai, the adults tell an all-too-familiar story of life savings spent on smugglers. They left their ancestral town of Ras al-Ayn, known to the now-ousted Kurdish population as Sere Kaniye, in October. They had a comfortable home there – 170sq m, says Yazzi. On day one of the bombing, they vowed that they would rather die there than leave. On day two, they fled for the sake of the kids.

Her husband, Khaled, picks up the story. “If there was any chance of going back to our old life, we’d go back tomorrow. But we lost our house. Where would we live?” he says. They’ve seen the video footage of Turkey’s Syrian Arab mercenaries looting, burning and confiscating properties. They know they’re never going back.

Now they’re stuck in this remote camp, miles from anywhere. One of the boys opens his eyes momentarily, quickly burrowing his face back into his sleeping bag, as if embarrassed to wake up in the presence of a stranger.

The boys are depressed, says Yazzi. “Life is getting up and going to sleep. Our tent is only 4 by 4. It’s snowing outside. We have no money. What else is there to do?” Sherwan (18) had been finishing secondary school, eager to study medicine. Now he feels he has nothing to live for.

Back outside, I find Nasiba, striding up the hill with her shopping. She takes me to her tent, where her two boys, Khaled and Adnan, wait by the heater. Immediately, she gets down on her knees to clean the floor with a hand-held sweeper. It’s much colder in this tent. You can feel damp rising from the insulation mat. Sitting on a mattress, I feel a draught at my back.

There’s no changing tent now, says Nasiba. Her life as head of the household, taking care of the kids and her mentally-ill husband, is a constant battle. But she’s a grafter. Back in Kobane, where the family used to live, she worked as a gardener, supporting the entire family. As soon as she turned up at Bardarash, she got a job as a cleaner at the camp school, run by the Norwegian Refugee Council.

The family has hope. Nasiba’s sister has been granted asylum in Canada. Once she has residency and work, she may be able to send for them. But this could take a few years. In the meantime, Nasiba must keep the show on the road, though her eyesight is going. “The other day I went into the wrong tent,” she says. She can’t afford eye tests and glasses. She can’t even afford the taxi fare into town.

As dusk falls, I meet Moussa and his two teenage nephews, Salah and Yusef, coming back from the camp shop. Moussa is visiting from Irbil, where he fled after the outbreak of the Syrian civil war. The boys hail from Tal Abyad, on the western edge of the cleared border area.

They travelled alone, sent by their father, who didn’t want them to be signed up by the Kurdish YPG militia or Syrian president Bashar al-Assad’s army. “Even if they joined the YPG, they cannot fight air strikes. It’s a waste of time putting our hopes in anything,” says their uncle.

There’s also the threat of Islamic State regrouping. “There’s no security. When night falls, you’re still scared there,” he says.

Alone in their dimly lit tent, the boys are waiting for their uncle to get them out of the camp. Their kerosene heater isn’t working properly. The sound of the spluttering flame combines with the pitter-patter of sleet on the roof of the tent.

They escort us back through the darkness, stepping around the slushy puddles, with tents rustling in the freezing wind.

For these Syrian Kurds who have lost everything, this truly is the bleakest winter.