More than 2,500 children have gone missing from Dutch centres over past 10 years 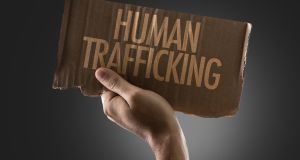 Pregnant women do not appear to have been trafficked in numbers until now, according to the immigration service. File photograph: iStock

At least 25 pregnant African women went missing from refugee centres in the Netherlands in November and December in what is feared may be a new development in the trafficking of refugees from centres across Europe.

More than 2,500 children and young teenagers have disappeared from Dutch refugee centres over the past 10 years and the vast majority of them have never been traced. However, pregnant women do not appear to have been trafficked in numbers until now, according to the immigration service.

Dutch police have confirmed the disappearances and the EMM – the Expertise Centre for Human Trafficking and Human Smuggling – has issued a nationwide alert to midwives, asking them to watch for any indications that women living in the centres may be experiencing “outside pressure”.

The majority of the pregnant women who have disappeared so far have been from Nigeria, but others were from Cameroon, Uganda and the Democratic Republic of Congo.

The EMM says it was initially surprised the women were “leaving” because they were in the Netherlands legally, had accommodation and legitimate documents, and were receiving medical care during their pregnancy.

As the numbers increased and a trend emerged, however, concerns hardened that the women were being trafficked and that when they were born their children could be illegally adopted – or even, in some cases, sold by traffickers for use in voodoo rituals.

Of the 2,500 children and young teenagers who previously disappeared, some will have gone “on the run” in search of extended family elsewhere in Europe – but there is no doubt that an unknown proportion have ended up in the hands of traffickers or in prostitution.

In the main, they were vulnerable “unaccompanied minors” under the age of 18.

Staff at the centres are now being trained to watch out for tell-tale changes that may be a prelude to being induced to leave, including withdrawn behaviour, new clothes, or expensive phones. They’ve also been asked to note the licence plates of suspicious cars.

“We try hard to make sure these places are not intimidating, not like prisons, so if someone really wants to go it’s difficult to stop them. Most unaccompanied minors stay and do very well in the circumstances.”

Dutch police were first in Europe to raise the alert about traffickers targeting refugee centres in the late 1990s when some 100 Nigerian girls went missing from shelters, many of them even before they were registered – a procedure that was subsequently done on arrival as a result.

Some of the Nigerian girls were later found working in brothels in Italy, alerting police to one trafficking route among many.

One of the 39 Vietnamese nationals found dead in a refrigerated lorry in Essex last October was a teenage boy who had run away from a refugee unit in the Netherlands. It transpired six Vietnamese teenagers had run away together the previous August.