A Greek Coast Guard has been caught on video pushing a boat full of migrants on the Aegean Sea and another Greek officer opening fire into water. According to refugees, this tactic is used to force them back to Turkey from Greece. Video: AAVN 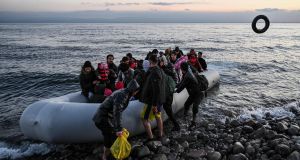 European leaders are heading to the Greek-Turkish frontier on Tuesday in a show of solidarity with Athens as it struggles to manage thousands of migrants who have massed at the border in the hopes of entering the European Union.

Turkey announced it had opened its borders over the weekend, reneging on a 2016 deal struck with Brussels to curb Europe’s last migration crisis, under which Ankara agreed to hold back flows of migrants in exchange for financial assistance.

But a worsening conflict in northwest Syria – where Turkey is fighting the regime of Bashar al-Assad and is on the brink of conflict with Russia – has displaced almost a million people, and president Recep Tayyip Erdogan declared it was time for EU countries to take their “share” of the displaced.

European leaders dismissed the move from Turkey as “blackmail”, and the EU border agency Frontex announced it would launch a “rapid border intervention” to assist Greece.

“Each time that the European Union is tested, as is the case now, unity must prevail,” said Margaritis Schinas, a Greek politician who is vice-president of the European Commission in charge of “promoting our European way of life”, as he welcomed the visit by the presidents of the commission, European Council and European Parliament.

“Ursula von der Leyen, Charles Michel and David Sassoli will be on the Greek-Turkish border in a very tangible concrete show of solidarity at a moment where the circumstances demand our leaders to be where the problem is,” Mr Schinas said. “Nobody can blackmail and intimidate the European Union.”

The three leaders are to visit a border post in the region of Orestiada on the border of Bulgaria and Turkey, before receiving a briefing from a Greek army chief and prime minister of Greece Kyriakos Mitsotakis.

As word spread that Turkey would not enforce the frontier, thousands of people began making their way to the border of the EU on buses and on foot.

“We’ve been here since the early afternoon and at first saw several hundred migrants gathering and now the numbers are well into the thousands,” said Lanna Walsh of the UN Migration Agency.

“We’ve spoken to Iranians, Afghans, Syrians, Africans of various nationalities and central Asians as well. All kinds of people: single men, families, pregnant women, children, all trying to make this journey to Europe.”

Several hundred people within 24 hours landed by boat on the Greek islands close to the Turkish coast. A child drowned when a boat carrying 48 people overturned off the island of Lesbos, the coast guard said.

The islands are already struggling to cope with tens of thousands of migrants who are living there in camps, in conditions the UN High Commissioner for Refugees Filippo Grandi has called “shocking and shameful”.

European Union ministers are to hold emergency meetings this week to address the crisis, which threatens to overlap with a scramble to contain the outbreak of the Covid-19 coronavirus. Both Greece and Hungary have used the coronavirus as justification to block routes for asylum seekers in recent days.