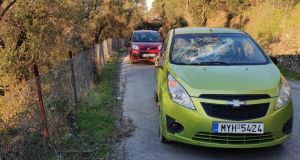 The vehicle Nicola Cochrane was travelling in (front) was attacked by men on motorbikes who smashed the windows of five cars carrying doctors, nurses, psychologists, a pharmacist and a translator. Photograph: Nicola Cochrane

An Irish doctor volunteering in the Moria refugee camp on the island of Lesbos has described how the car she was travelling in on Sunday was attacked with “planks of wood and baseball bats” by a group of local men as violent clashes continue to spread across the island.

Dr Nicola Cochrane, a GP from Greystones who travelled to Greece last Friday to volunteer for one month, was forced to leave the camp on Sunday afternoon after demonstrations between local Greek men and young men from the refugee camp became violent.

The vehicle she was travelling in was attacked by men on motorbikes who smashed the windows of five cars carrying doctors, nurses, psychologists, a pharmacist and a translator.

“They got the impression we were driving down to the coast to get refugees off the boat. These Greek men and teenage boys in balaclavas carrying big sticks, planks of wood and baseball bats started smashing our windows.

“They were shouting at us to get out of the cars, I was worried they were going to start grabbing us. I don’t know what they would have done if we had stopped and got out. All our cars were smashed to pieces.”

Protests on the islands of Lesbos and Chios have been breaking out in recent days in response to the number of migrants already on the island and in light of Turkey’s decision to re-open its border for migrants to travel to the European Union.

German politician and MEP Erik Marquardt, who is currently on Lesbos, tweeted on Sunday that locals were “attacking journalists and NGO volunteers on different spots on the island”.

Speaking to The Irish Times by phone, Dr Cochrane related how the group she was travelling with, made up of about ten women and two men from Norway, Spain, the United States, Hong Kong and Afghanistan, eventually stopped in a village to call for help. One woman sustained a small injury from broken glass to her hand but the rest of the group were uninjured, she said.

A local policeman advised they stay put as the authorities were busy dealing with violent clashes elsewhere on the island.

“The word on the street is they’re going to attack the houses the NGOs are in. We can’t go back to the camp and we can’t move on to our accommodation. The police said to wait here for three hours but if it gets dark we’re fairly screwed. We don’t feel safe.”

Dr Cochrane said a vehicle carrying two Irish GPs from Donegal, who arrived on Lesbos on Sunday, was also attacked but managed to turn back towards the refugee camp.

“We need to cobble together a plan for the next few weeks. We can’t just abandon these people. Our work here is going to have to be revised.”

Conditions in the camp are dreadful, with stabbings and fights occurring daily, she said. “The squalor in the camp is insane. Everyone has got scabies and influenza. The place doesn’t have the capacity for this many people.”

“There’s a lot of anger, especially among younger men in the camp. They’re starting to act out which is predictable and feel they’re being mistreated by the Greeks. That’s a bit harsh because where is the rest of Europe in this?

“The lack of international response to this situation is appalling. It’s like everyone has turned their backs and washed their hands of it.”

Asked what will happen if the coronavirus hits the island, Dr Cochrane replied there were more important issues to focus on.

“We have a bit of influenza in the camp and that’s every bit as much as a risk to these people as the coronavirus, they’re so vulnerable. People will die in their droves if it does hit. But we can’t worry about the coronavirus now, they already have enough problems.”

The Moria camp has capacity for around 3,000 people, however, reports from the area estimate somewhere between 13,000 and 19,000 people are currently residing in the makeshift compound.

It’s understood boats carrying migrants have started to arrive at the island but have been prevented by locals from docking and allowing passengers to disembark.

When Dr Cochrane last spoke to The Irish Times through What’s App on Sunday evening, the group had made it to a safe area on the island.

“We don’t want to publicise where we are right now in case the enclosure is attacked,” she texted. “No plan for what happens next. I get the impression all the NGOs are considering the safety issues.”