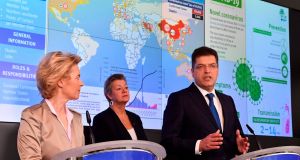 European authorities raised the risk level of the Covid-19 coronavirus to “moderate to high” for the continent on Monday as a dedicated task force was launched to combat the spread of the virus.

“While we should not give in to panic, the situation is likely to still get worse,” said European Commissioner for Crisis Management Janez Lenarcic. “What we have learned so far, especially given what China has been experiencing, is that every country needs to get ready.”

The European Centre for Disease Protection and Control raised its risk level to “moderate to high” for people in Europe, as it warned control measures had slowed, but failed to stop, the spread of the virus.

“A significant increase in Covid-19 cases in the coming weeks would have a high impact on public health and on healthcare systems,” the centre warned.

“This situation would be further exacerbated if substantial numbers of healthcare workers became infected. Bottlenecks may also emerge in terms of diagnostic capacity. Containment measures intended to slow down the spread of the virus in the population are therefore extremely important.”

The European Commission announced a dedicated task force to tackle the crisis on Monday. The team of five commissioners will liaise between EU countries to coordinate on the medical response, border management, and on economic policies.

“The risk level has risen to moderate to high for people in the European Union. In other words, the virus continues to spread,” European Commission president Ursula von der Leyen told reporters.

“We have a situation that is very complex and it requires on the one side, very swift action and on the other side, a strong coordination at all the levels and all the different sectors.”

Only national governments have the power to set health policy and implement border controls, but the EU is working to enable member states to act in concert. It has called on member states to make decisions that are proportionate, based on scientific evidence, and taken in coordination with other countries.

Any closure of borders within Europe’s check-free Schengen zone due to health risks would be a first in history.

An emergency meeting of European health ministers has been called for Friday in Brussels to discuss the “latest developments” of the outbreak.

The crisis threatens to cause economic turmoil as businesses and schools shut, citizens stay home and cancel travel plans, and public events are called off all across Europe.

The EU is prepared to intervene to prop up economic growth if needed, officials said.

“The EU is ready to use all the available policy options if and when needed to safeguard our growth,” said EU economics commissioner Paolo Gentiloni at the launch of the Coronavirus task force.

Italy announced a package of €3.6 billion in support for companies, as the OECD warned the outbreak could halve the amount of economic growth expected worldwide this year.

EU finance ministers are to hold an extraordinary conference call on Wednesday to discuss measures they could take nationally to reduce the risks of an economic crisis, Gentiloni said.

This could include public support for healthcare, and short-term measures to avoid a credit crunch, with the potential for a “coordinated fiscal response” to be decided by finance ministers in March.

A conference on the world economy due to take place in Italy later this month with Pope Francis taking part was postponed until November because of the outbreak.

Pope Francis said on Sunday he had a cold and would have to skip a week-long Lenten spiritual retreat for the first time in his papacy. The Vatican has played down speculation he might have coronavirus, saying he only had a “slight indisposition”.