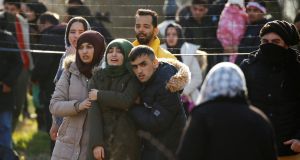 Hundreds of refugees have headed towards northwest Turkey’s borders with Greece and Bulgaria after Turkish authorities appeared to signal they would no longer stop migrants trying to enter the European Union.

Buses and taxis carried groups to border posts between Turkey and its western neighbours as Ankara sought to increase pressure on the EU and Nato after 33 Turkish soldiers were killed in an attack in the Syrian province of Idlib, the last Turkish-supported rebel enclave.

Although Turkey’s foreign ministry insisted on Friday afternoon that there had been no policy change, the rush had already begun after the Reuters news agency reported an unnamed Turkish official as saying that Turkey would no longer prevent refugees from reaching Europe by land or sea.

“All refugees, including Syrians, are now welcome to cross into the European Union,” the official said, according to the report, adding that police and border guards had been stood down. The statement then spread rapidly across Arabic-language social media.

Omar Kadkoy, migration policy expert at Ankara-based think tank Tepav, said there was widespread confusion about the Turkish position, adding that Turkey had not opened its official crossings with Bulgaria or Greece.

“What’s going on . . . is that instead of turning one blind eye to irregular movement across the border, the Turkish government is choosing to be temporarily completely blind,” he said. Ankara seemed to be trying to “pressure the Europeans for further support” in Syria, he added.

The European Commission said on Friday that it had heard nothing from Turkish authorities to suggest they had diverged from a 2016 agreement to curb unofficial migration into the continent.

But Kyriakos Mitsotakis, Greece’s prime minister, said the country had increased border security after “significant numbers” of migrants and refugees had “attempted to enter the country illegally”. Bulgaria’s defence minister said it was prepared to send 1,000 troops to its border.

Turkey, already home to more than 4m refugees from Syria and elsewhere, has repeatedly warned it cannot take any more migrants. Preventing more refugees from arriving was a key motivation for Ankara’s decision to deploy troops to Idlib to try to halt the Syrian regime’s latest advance.

The offensive by Russian-backed forces loyal to Syrian president Bashar al-Assad has forced 948,000 people to flee in the last three months, the UN estimates. Some 3m civilians are crammed into camps and overflowing towns by the Turkish border in northwest Syria.

“Turkey won’t be able to host all [of those who have fled in Idlib],” said Norbert Roettgen, head of the Bundestag foreign affairs committee. “Then what?”

Yet Turkey’s calls for international help to create a buffer or no-fly zone in Idlib to halt bombardments by Syrian and Russian jets have not moved the EU and the US, which appear to have little appetite to provide military support.

“You feel in western policy circles that people are wishing Syria away,” said Emile Hokayem, senior fellow at the International Institute for Security Studies think tank. By letting refugees head to the European border, “Erdogan is reminding them it’s everyone’s problem”.

Those refugees planning to head for the border on Friday included Firas, a 30-year-old Syrian who helped co-ordinate hastily-organised bus convoys leaving the Turkish capital. “The government is turning its face away . . . maybe they want Europe to carry some of the refugees’ burden,” he said.

Firas said 22 buses had left and nine more were planned, but suggested that it was a race against time before Turkey locked down movement once again. “We only have 24 hours.”

For months the Turkish government has tightly restricted the movement of Syrian refugees between cities. But on Friday, at one Istanbul departure point, several police officers in uniform stood nearby as families boarded buses.

“Syrians understand so well that they are being used as a weapon,” said Elizabeth Tsurkov, fellow at the Foreign Policy Research Institute in Philadelphia. “People who are thinking about rushing towards the border . . . they say okay, everyone used us as pawns, at least in this case it could be to our benefit”.

European officials have long feared an exodus from Idlib could trigger a fresh spike of arrivals in the EU, further overloading already overcrowded Greek refugee camps.

The arrival in 2015 of more than 1m migrants on EU shores via dangerous land and sea routes prompted the bloc to strike a €6 billion deal with Turkey under which Ankara agreed to prevent people crossing the Aegean Sea to Greece in exchange for humanitarian funding for refugees.

The deal was attacked by critics as an attempt to outsource EU’s refugee policy and opponents have been quick to cite the latest crisis as a another example of its failings.

“This once again goes to prove the 2016 EU-Turkey refugee agreement is hardly a sustainable solution to the humanitarian crisis at the gates of Europe,” said Liam Patuzzi of the Migration Policy Institute Europe think tank. – Copyright The Financial Times Limited 2020