Fear, bewilderment among those told to isolate themselves but do not know why 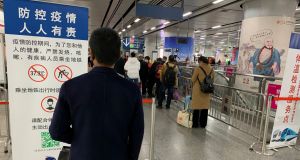 An undated photograph of a man reading instructions about the Alipay Health Code at the entrance to the subway in Hangzhou. Photograph: Paul Mozur/The New York Times

As China encourages people to return to work despite the coronavirus outbreak, it has begun a bold mass experiment in using data to regulate citizens’ lives by requiring them to use software on their smartphones that dictates whether they should be quarantined or allowed into subways, malls and other public spaces.

But an analysis of the software’s code found that the system did more than decide in real time whether someone posed a contagion risk. It also appears to share information with the police, setting a template for new forms of automated social control that could persist long after the epidemic subsides.

The Alipay Health Code, as China’s official news media has called the system, was first introduced in the eastern city of Hangzhou – a project by the local government with the help of Ant Financial, a sister company of the ecommerce giant Alibaba.

People in China sign up through Ant’s popular wallet app, Alipay, and are assigned a colour code – green, yellow or red – that indicates their health status. The system is already in use in 200 cities and is being rolled out nationwide, Ant says.

Neither Chinese officials nor the company has explained in detail how the system classifies people. That has caused fear and bewilderment among those who are ordered to isolate themselves and have no idea why.

The sharing of personal data with the authorities further erodes the thin line separating China’s tech titans from the Communist Party government.

The analysis found that as soon as a user grants the software access to personal data, a piece of the programme labelled “reportInfoAndLocationToPolice” sends the person’s location, city name and an identifying code number to a server.

The software does not make clear to users its connection to the police. But according to China’s state-run Xinhua News Agency and an official police social media account, law enforcement authorities were a crucial partner in the system’s development.

Although Chinese internet companies often share data with the government, the process is rarely so direct. In the United States it would be akin to the Centres for Disease Control and Prevention using apps from Amazon and Facebook to track the coronavirus, then quietly sharing user information with the local sheriff’s office.

In a statement Ant Financial’s general counsel, Leiming Chen, said that Ant required all third-party developers, including those offering health code services, to adhere to its data security and privacy requirements, which include obtaining user consent before providing services. “The collaboration between private and public sectors in epidemic control is a common global practice,” Chen said.

In response China has stepped up its efforts to ensure, mostly with the help of old-fashioned human enforcement, that citizens leave digital footprints wherever they go. Across the country, workers in train stations and outside residential buildings record people’s names, national ID numbers, contact information and details about recent travel. In some cities, residents now have to register their phone numbers with an app to take public transportation.

The Alipay Health Code’s creators say it uses big data to draw automated conclusions about whether someone is a contagion risk. After users fill in a form on Alipay with personal details, the software generates a QR code in one of three colours. A green code enables its holder to move about unrestricted. Someone with a yellow code may be asked to stay home for seven days. Red means a two-week quarantine.

In Hangzhou, it has become nearly impossible to get around without showing your Alipay code. Propaganda-style banners remind everyone of the rules: “Green code, travel freely. Red or yellow, report immediately.” At times during a recent visit, tensions over the code were evident. Two subway guards said older passengers, annoyed by the phone checks, had cursed and yelled at them. When one middle-age man barged through a line, a guard had to run him down. As she did, others slipped by, their phones unchecked.

In a February 24th news briefing, officials said more than 50 million people had signed up for health codes in Zhejiang province, the capital of which is Hangzhou. That is almost 90 per cent of the province’s population.

Of these codes, 98.2 per cent were green, which means nearly a million people had yellow or red codes.

An official webpage with questions and answers about the service says a yellow or red code may be given to someone who has had contact with an infected person, visited a virus hot zone or reported having symptoms in the sign-up form. This suggests that the system draws on information about coronavirus cases and government-held data on plane, train and bus bookings.

Beyond that, however, analysis also found that each time a person’s code was scanned at a health checkpoint, for instance, his or her current location appeared to be sent to the system’s servers. This could allow the authorities to track people’s movements over time.

Ant Financial declined to answer questions about how the system worked, saying that government departments set the rules and controlled the data. Alipay has 900 million users across China. Ant is part-owned by Alibaba, whose shares trade in New York and are owned by major international investors.

Tencent, the Chinese internet giant that runs the messaging app WeChat, which has more than a billion monthly users, has also worked with the authorities to build its own health code system.

Leon Lei (29) signed up for an Alipay code before leaving his hometown, Anqing, to return to work in Hangzhou.

At first his code was green. But a day before he departed, it turned red, and he did not know why. Anqing has not been especially hard hit by the virus, though it neighbours Hubei province, the centre of the outbreak.

On the road to Hangzhou, officers at two highway exits saw his digital scarlet letter and stopped him from taking the exit. Only at a third exit was he allowed to pass.