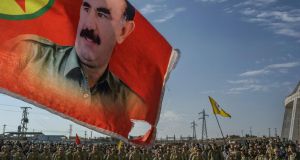 Washington’s Kurdish allies face the threat of Turkish invasion and occupation of the border zone they rule in Syria once US troops pull out of that country and US air strikes on Islamic State fighters cease.

The US’s decision to withdraw its troops from Syria was announced by President Donald Trump last week and led to the resignation of his defence secretary James Mattis.

The alliance between the US and the Syrian Kurdish People’s Protection Units (YPG) was forged during the battle for the Islamic State-held town of Kobani in 2014-15.

Reinforced by other Kurdish and Arab fighters and given air cover by US warplanes, the YPG retook Kobani on January 29th, 2015, in an offensive that was seen as a turning point in the campaign to defeat Islamic State, the terror group also known as Isis.

The YPG was tough, secular and eager to carve out a territorial base embracing Kurdish-majority towns and villages along the Syrian-Turkish frontier

The US military was impressed with the determination and dedication of YPG fighters, who had received training and arms from the Turkish Kurdistan Workers’ Party, which has been waging a war for autonomy against Ankara for three decades.

The US saw the YPG as a godsend after repeatedly failing to turn Syrian Arab insurgents into effective fighters in the campaign to oust Syrian president Bashar al-Assad.

The YPG was tough, secular and eager to carve out a territorial base embracing Kurdish-majority towns and villages along the Syrian-Turkish frontier. Ankara, however, strongly objected to the US adoption of the YPG, arguing that as an offshoot of the Kurdistan Workers’ Party it was a major threat to Turkey’s security.

The US attempted to assure Ankara that the YPG would pose no danger to Turkey: armour and heavy weapons would be in the hands of US troops deployed to northern Syria and would be removed when they departed.

The YPG is the military wing of the leftist Kurdish Democratic Union Party, which seeks to establish an autonomous Kurdish region in Syria similar to that in northern Iraq. Unlike their Iraqi brethren, however, the Syrian Kurds did not disavow ties to the Kurdistan Workers’ Party.

In the area dominated by Syrian Kurds, which they call Rojava, the Kurdish flag is flown and portraits of imprisoned Turkish Kurdish leader Abdullah Öcalan are displayed in government offices and public places. Some Arabs living in the Kurdish-ruled area were accused of collaborating with Islamic State and expelled, alienating Arab communities across northern Syria.

Success in battle encouraged the YPG to go along with the US-led offensive against Islamic State in Raqqa, an Arab city, although some Kurdish leaders warned against this venture outside their home region. After Raqqa fell, the US deployed YPG fighters in Deir al-Zor province, where they captured Syria’s main oilfields from Islamic State. Kurdish rule was extended over 25 per cent of Syrian territory and a restive, resentful Arab majority.

Although allied to the US, the Kurds did not cut ties to Damascus. In negotiations with government representatives, the Kurds demanded autonomy for the entire area they hold and called for Syria to become a federation. The government in Damascus rejected Kurdish demands, insisting Syria must have strong central government in the aftermath of nearly eight years of division and war.

Experts argue that the only way to avert a Turkish invasion is to employ the period used by US withdrawal to revert to the status quo before the conflict, a project supported by Syria’s Arab neighbours. The Kurds would return the area they hold to government rule on its terms and Damascus would restore Syrian sovereignty along the northern border.

Syria’s allies Russia and Iran, which have committed to the restoration of all Syrian territory, would provide protection for Syrian troops and frontier forces. The YPG would exit the border zone and submit to Syrian army command and control. The Kurds would stop speaking of Rojava and remove Kurdish flags and portraits of Öcalan, seen as a provocation in Ankara.