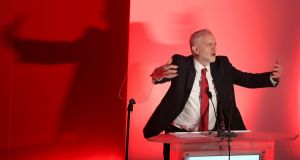 Labour leader Jeremy Corbyn is being criticised within his party for his Brexit stance. Photograph: Owen Humphreys/PA Wire

Labour leader Jeremy Corbyn has taken a stance “completely at odds with the will of members” by saying the party would continue with Brexit should they win a snap election, a critic has said.

Mr Corbyn also said he would advocate Britain leaving the European Union in any second referendum and criticised EU laws on state aid that he said blocked investment.

Labour passed a motion at its party conference in Liverpool in September that it would seek a general election as its first choice, but left open the option of supporting a second referendum.

Michael Chessum, who worked on Mr Corbyn’s successful 2016 leadership campaign and served on Momentum’s first steering committee, was among those expressing dissent at his support for Brexit.

He told the Observer: “Jeremy has fought for decades for the right of members to decide policy, and that is why many of us fought for him so hard.

“It is beyond me why he would now seemingly take a stance so completely at odds with both the will of members and the mandate of party conference.

“If a left leadership is seen to thwart the will of members, this will do the left profound damage in the long run in Labour’s internal politics,” Mr Chessum said.

Mr Corbyn’s fellow MPs were also critical of the stance, which the Islington North MP revealed in a Guardian article, with former shadow business minister Chuka Umunna saying the interview was “deeply depressing and disappointing”.

Writing on Facebook he said: “Brexit is essentially a project of the hard right of British politics who want to turn Britain into a lightly regulated, offshore tax haven for the super rich, devoid of proper protections for workers, and one which seeks to dump the blame for the UK’s problems on immigrants.

“Labour should stop pretending there is a ‘good’ Brexit deal and we should certainly not be sponsoring this project because Brexit is the problem — it solves nothing.”

Meanwhile, Mr Corbyn told the Sunday Mirror he did not foresee support for a second referendum in Parliament.

When asked how he would vote in one, he told the paper: “It would depend what the question was — but we’re quite far from that anyway and I’m not sure there’s the support for it in parliament.

“The issue is protecting jobs, manufacturing and the rights and conditions we’ve got — not making us the bargain basement of Europe.”

He also said he will make sure Theresa May’s Brexit blueprint is defeated in the Commons when it returns in January.

“I’m determined to hold this government to account, vote the deal down and reopen those negotiations,” he said.

Elsewhere, Brexiteer Commons leader Andrea Leadsom said MPs who want to block a no-deal Brexit will have to either vote for Mrs May’s withdrawal agreement or a replacement to do it.

The Tory MP warned politicians lining up to block efforts to take the UK out of the EU in March without an alternative no-deal was the “legal default position”.

Her comments in an interview with the Sunday Telegraph came after she spoke in support of a “managed no-deal” as a possible alternative to the PM’s withdrawal agreement should it fail to pass the Commons in January’s planned vote.

In a sign of the widening splits in Tory thinking over no-deal, former chancellor George Osborne earlier warned that a no-deal Brexit could see the party stuck in opposition unless it abandoned the “reckless decision of hard Brexiteers”.

Three Tory MPs — Nick Boles, Anna Soubry and Sarah Wollaston — have warned they would resign the whip if a no-deal Brexit ever became official Government policy, and Justice Secretary David Gauke has suggested he would quit the Government.– PA