The teenager who hunts wolves in Mongolia and posts eagle selfies 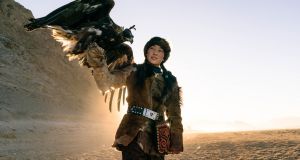 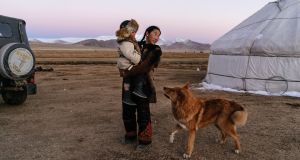 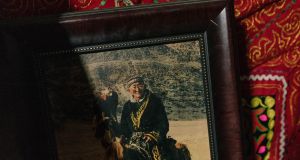 When school is done on Fridays, Zamanbol heads back home, finishes her homework and does her chores as typical teenagers do anywhere. On Saturdays, she saddles up her horse, treks deep into snow-capped mountains and hunts wild beasts with a trusted partner: her trained bird of prey.

Zamanbol (14) is an eagle hunter. A Kazakh nomad in the Altai region of Mongolia, she is part of a generation of nomadic youth who are embracing customs centuries old as they seek connection with their roots and the wild in a world being transformed by technology.

The young hunter, who goes to school in town during the week and returns to her nomadic family’s ger, or yurt, on the weekend, has been living among eagles her whole life. The demanding craft of eagle hunting was passed on to her by her grandfather, Matei. With him by her side, she and her eagle have even hunted wolves. Her grandfather taught her all he knew of hunting with eagles - how to call to the bird in the sky, how to whisper to it soothingly when perched on her arm. When he died, she inherited his prized bird.

“After my grandfather’s death, I wanted to continue his way,” Zamanbol said. Just as Zamanbol began learning the craft at a young age, the training of the birds starts soon after an eaglet is captured from the nest, often after a hunter has made a rugged climb up a cliff. The resulting relationship between hunter and eagle is close and lasts years; some last more than a decade, with a few hunters even talking about the eagle as if it were their child.

Hunters will often sing to their eagles to get them used to their voice. Female eagles, larger and stronger than males, are used almost exclusively in the hunt. Once grown to about 15 pounds, the eagles ride with their hunters on horseback into the mountains, where they are released to scan the landscape for prey, typically foxes and rabbits.

But wolves are the true prize, even if the hunters fear for their birds’ safety when they go in for the dangerous, and brutal, kill. Eagle hunting almost vanished in the last century. It was kept alive by the Altai Kazakhs in western Mongolia in Bayan-Olgii province, where at least 400 ethnic Kazakhs have formally registered as eagle hunters. The province is the only one in Mongolia that is majority Kazakh, and majority Muslim.

Now, for perhaps for the first time in its history, the art, and its essential role in Altai Kazakh culture, is being shared with outsiders. Hunters come together for the Golden Eagle Festival to compete in a two-day gathering open to tourists.

A popular 2016 documentary film about Aisholpan, a young eagle huntress who won the festival’s hunting competition in 2014, helped bring the Altai Kazakh culture to international attention. Just gathering the hunters together is a logistical feat, since many are pastoral nomads, some without cellphones or a fixed mailing address. Many will arrive on horseback, clopping down dirt roads clad in wolfskin and fox fur. During the festival, Soviet-era vehicles dot the steppe, with local vendors selling tapestries depicting Kazakh life, leather-bound books with Mongolian sayings and intricate bottles for Mongolian snuff. Children sit on the ground, playing games with shagai, sheep knuckle bones.

The number of foreign tourists coming to the festival is growing, with a record of more than 1,000 this year, according to government officials. This year, 120 eagle hunters took part: From the top of a mountain, the eagle is released as its hunter waits on horseback in a makeshift arena set up at the mountain’s foot.

The goal is to have the bird meet its hunter within a targeted area some 20 yards wide. To prod the eagle, the hunter holds aloft a piece of meat, and makes a loud cry for the bird. A reunion within the target area is no given: This year, just 18 eagles made it. For each successful convergence between hunter and eagle, gasps and cheers of awe erupted across the steppe. The winning eagle is chosen after a second round, judged on how they hunt a mammal carcass tied to a galloping horse.

Released to the wild

When Zamanbol rides out into the mountains to hunt, she often lets her friends come along, all moving confidently atop their horses over the rough terrain, bantering at full gallop. In the selfies the girls post on Facebook, Zamanbol’s eagle appears with them like a peer. “Your eagle is lovely,” one of the Facebook comments reads. Technology has widened gaps between generations across the world, and Bayan-Olgii is no exception. But eagle hunting, for the few who practice it, has been a bridge connecting Kazakh youth to their elders.

For Zamanbol, her eagle embodies her grandparents, although the bird she hunts with today is not the one her grandfather gave her. Out of custom and love, the eagles are eventually released back into the wild. Zamanbol was 13 when she let go her first eagle, the one she inherited from her grandfather.

Many hunters described deep sorrow coupled with a sense of well-wishing as their partner took the final flight from their arm. Before her eagle was let go, Zamanbol’s family slaughtered a sheep for the occasion. She then tied a white ribbon around its leg, went up to the mountains and bid farewell. “I was sad,” Zamanbol said, “but I wanted her to be free.” – New York Times