In troubled Greece, a coup may not be likely but it’s not unthinkable

Greece Letter: Today there is that same paralysis and sense of catastrophe as in 1967 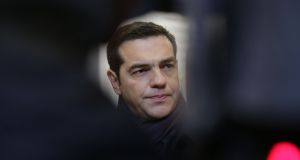 Last month a 53-year-old woman was sentenced to 10 years in prison for falsifying her elementary school certificate more than 15 years ago to get a cleaning job in a publicly funded nursery. The relevant law relates to “crimes against state property”, which includes benefiting from fraud.

The main abusers are civil servants who have been appointed on the basis of forged degree certificates. Rather more serious than a cleaning lady without a junior cert. Falsification of credentials is certainly widespread in Greece: 2,000 such cases were detected in recent years, and the post-holders were dismissed and then reinstated. This woman’s conviction has led to calls for a more common-sense approach to the offence.

At the other end of the offence spectrum, prime minister Alexis Tsipras stated last month that there was “no lawlessness” on university campuses, which are traditionally immune to police interference. His declaration ignores the fact that such immunity has permitted anarchists and drug-pushers to infest university campuses in Athens and Thessaloniki, in some cases even setting up offices and radio stations.

These two instances have led senior journalists to question the narrative of Greek society and its leaders. “Narrative” in this context means both “Where have we come from?” and “What is our route map to a better future?” Alexis Papachelas, executive editor of Kathimerini newspaper and a prominent broadcaster, asks for a “paradigm shift”. He asks “Can the culture of this country change?”

The short answer is no. You can’t overnight eradicate graft, clientelism, bureaucratic inefficiency and putting party before principle, which are the main obstacles to social justice, economic growth and transparency in government.

If I ask myself what are the ineradicable qualities that I see in the culture of the Greeks among whom I live, it’s filotimo, (dignity, love of honour), family and compassion – human and humane qualities that have to fight against the greed and mendacity that come to the fore in times of hardship.

Papachelas points out that politicians veer between “true leadership” and partisan opportunism. Tsipras has long campaigned to separate church and state, especially in the area of education. Last month he reached an agreement whereby the 10,000 priests of the Orthodox Church in Greece were taken off the public payroll. He promptly announced that he could then create 10,000 new jobs in the public service without adding to the bill.

This is the way the vision of “true leadership” is watered down by opportunism. It doesn’t alter article 3 of the constitution, which recognises the Orthodox Church as “the prevailing religion”, nor does it introduce sex education in schools, which the church currently prevents. It has, however, made Tsipras a laughing stock among political commentators.

We do have different types of disappearance, torture and internment: the emigration of Greece’s best young brains

This situation is not helped by those who insist that everything in the Greek garden is ródina (rosy). The diaspora, in particular (and this includes the Greeks living in Ireland) would like to think Greece still embraces its classical heritage: democracy, philosophy and culture, rather than the post-independence and post-civil war spirit of a country still shrunken by poverty and emigration.

They are not unlike those Irish-Americans who believe the ould sod hasn’t changed since John Ford made The Quiet Man and Robert Flaherty invented Man of Aran.

Public opinion at present is so divided on such issues as the economy, education, and Greece’s relations with Turkey, Macedonia and the EU, that the only lesson we can draw is the widespread disenchantment with all the political parties and, in particular, their leadership or lack of it.

With a very weak political centre and an increasingly strong right wing both in parliament and in the security forces, a coup may not be likely but it is not unthinkable. The military coup of 1967 brought decisive government for seven years, during which public opinion at home and internationally was alienated but the economy improved enormously.

The junta’s justification was that it replaced “the paralysis of state machinery” that had brought Greece to “the edge of national catastrophe”. The price, as this newspaper’s Peter Murtagh reported graphically in his book The Rape of Greece, was torture, internment and the culture of disappearance.

Today, we have that same paralysis and sense of catastrophe. We don’t want a fascist government that expels all foreigners, gays and Roma people (which is the policy of the neo-Nazi Golden Dawn).

But we do have different types of disappearance, torture and internment: the emigration of Greece’s best young brains; the pain, for those remaining, of how to survive in a climate of indecision and uncertainty; and the virtual house arrest of the 25 per cent of the population with shrinking pensions who wonder how to pay their electricity bills and still put food in their stomachs.