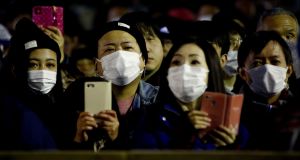 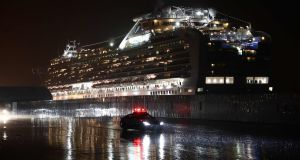 A police car drives past the Diamond Princess cruise ship, with people quarantined onboard due to fears of the new Covid-19 coronavirus in Yokohama port on February 16th, 2020. Photograph: Behrouz Mehri/AFP via Getty Images

The number of new coronavirus cases in China fell slightly on Sunday as the death of a Chinese tourist in France marked the first virus-related fatality in Europe.

Beijing’s latest figures showed 68,500 cases of the illness and 1,665 deaths, most of them in the Chinese province of Hubei.

The National Health Commission on Sunday reported 2,009 new cases, down from 2,641 the previous day, and 142 new deaths, just one lower than the 143 the previous day. All but four of the new deaths were in Hubei.

The province and its capital, Wuhan, have been sealed off and locked down since January 23rd, with schools, offices and factories shut and most travel suspended.

Meanwhile US officials in hazmat suits boarded a cruise liner on Sunday to fly home Americans quarantined for two weeks off Japan. After being held on board the Diamond Princess since February 3rd, American passengers were told to get ready for Sunday evening charter flights home from the cruise liner, which accounts for about half of all confirmed coronavirus cases outside China. Canadian, Italian, South Korean and Hong Kong passengers were expected to follow, after their governments also announced plans to repatriate passengers.

Coronavirus, thought to have emerged at a wildlife market in Hubei, has presented the ruling Communist Party with the huge challenge of halting its spread while at the same time minimising damage to the world’s second-largest economy.

The virus is believed to have an incubation period of 14 days – which would appear to indicate it has been spreading since the lockdown was imposed.

But health commission spokesman Mi Feng said the campaign was beginning to show results. “The effect of the coronavirus controls is appearing,” Mr Mi told reporters. Increased medical support and preventive measures in Hubei had headed off more critical cases and the proportion of critical cases among confirmed cases had fallen to 21.6 per cent on Saturday, from 32.4 per cent on January 27th, Mr Mi said.

Mild cases were also being treated more quickly, preventing them from becoming critical, he said.

Nevertheless, restrictions were tightened in Hubei on Sunday with a ban on vehicles, apart from essential services, and companies told to stay shut until further notice.

“China should strengthen the unified leadership of efforts to control the epidemic,” President Xi Jinping said in comments reported by the Xinhua news agency.

Outside mainland China, there have been about 500 cases in some two dozen countries and territories, with five deaths – in Japan, Chinese-ruled Hong Kong, the Philippines, France and Taiwan.

In the French case, an 80-year-old Chinese man died at a Paris hospital of a lung infection due to the flu-like virus, authorities said on Saturday.

“We have to get our health system ready to face a possible pandemic propagation of the virus, and therefore the spreading of the virus across France,” said health minister Agnes Buzyn.

In Taiwan, a 61-year-old taxi driver died from the coronavirus, officials announced on Sunday. The country’s health minister Chen Shih-chung said the man had diabetes and hepatitis B. Taiwan has to date accumulated 20 confirmed cases.

The man had not travelled abroad recently and was a taxi driver whose clients were mainly from Hong Kong, Macau and mainland China, the minister said. One of his family members was also confirmed to have the virus.

The island will on Monday start testing all patients who show symptoms associated with coronavirus and had travelled abroad recently, the health ministry said.

The virus, now officially labelled Covid-19, has killed about 2 per cent of those infected. Cases have spread faster than other respiratory viruses this century.

After an extended Lunar New Year holiday, China urgently needs to get back to work. But some cities remain in lockdown, streets are deserted, employees are nervous, and travel bans and quarantine orders are in place around the country.

Those returning to Beijing from the holiday have been ordered to undergo a 14-day self-quarantine to prevent the spread of the virus.

Many factories are yet to reopen, disrupting supply chains in China and beyond for everyone from smartphone makers to car manufacturers.

While there has been some hope expressed this week that the disease may be peaking in China, numbers keep rising and a trend has been hard to discern, especially after a reclassification that widened the definition of cases.

The World Health Organisation director-general Tedros Adhanom Ghebreyesus said it was impossible to tell where the epidemic will spread.

“Most of all, we are concerned about the potential havoc this virus could wreak in countries with weaker health systems.”