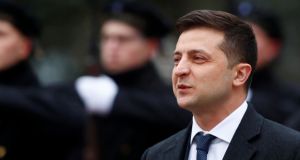 In his first New Year’s Eve address as the president of Ukraine, Volodymyr Zelenskiy urged his compatriots to make unity their “national idea” in 2020.

“Let’s learn to live together respectfully for the sake of our country’s future. After all, we imagine the same thing: a successful, flourishing country, where there is no war,” he said in a speech beamed into millions of homes as midnight neared.

Yet his call “to love all Ukrainians, whichever corner of our country they were born in” will have struggled to reach many of the people who most needed to hear his appeal for peace and inclusivity.

When Russia seized Crimea and fomented war in Ukraine’s eastern Donbas region in 2014, along with fighters, weapons and funds it also began pumping propaganda into both areas and blocking Ukrainian television and other media.

Kiev hit back by banning Russian social networks and some news outlets, while trying in vain to re-establish TV broadcasts to about three million Ukrainians who now live in separatist-held parts of Donbas, where Moscow and its proxy militia rule the airwaves and portray Ukraine as a failed state and hotbed of fascism.

When he swapped a stellar comedy career for politics last year and swept into power on pledges to end the war and crush corruption, Zelenskiy and long-time colleagues resolved to use their media savvy to break Russia’s information blockade.

“I think Zelenskiy has a real desire to re-integrate the non-government-controlled territory ... but I don’t see any real strategy with this TV channel or other things”

The resulting television channel is due to start broadcasting across militia-run Donbas next month, but sceptics fear it will merely distract from Ukraine’s key task: to devise a clear strategy to end the war that could break the deadlock in peace talks, overcome Russian intransigence and avert an interminable “frozen conflict”.

“In the context of an information war, we understand the importance of fighting for the minds of Ukrainian citizens in the temporarily occupied territories,” Yuriy Kostyuk, Zelenskiy’s deputy chief of staff, told the news website RBK-Ukraina recently.

“We in the president’s office and the [culture] ministry know exactly which information and what kind of content is needed there, and how to deliver it technically,” added Kostyuk, who was formerly a screenwriter for Zelenskiy’s Kvartal 95 production company.

The director of Zelenskiy’s comedy Servant of the People is helping to set up the channel, but at least one senior editor has already quit, the station is still nameless and its launch has been postponed from mid-February to March 1st.

Culture minister Volodymyr Borodyanskiy, a former television executive, has brushed off concerns and said the broadcaster will deliver “premier content” to 80 per cent of people living beyond the frontline.

“It will be a powerful channel,” Borodyanskiy told Ukraine 24 TV last week. “Information about Ukraine will be shown there in a true light. That’s our task.”

Yet many who know Donbas well expect the station to do little to change entrenched views or help end almost six years of fighting that has killed about 14,000 people and displaced more than 1.5 million.

“People in non-government-controlled areas cross the ‘border’ for pensions and other things, they have personal contacts, many have internet access. So they more or less know what’s going on in Ukraine,” says Vitaliy Syzov, an analyst at the Kiev-based Donetsk Institute of Information.

“If they want this information they will find it ... But now nobody believes anyone on the other side, so this kind of TV channel is not such a powerful tool,” says Syzov, who left Donetsk in 2014 and is barred from returning by the militants.

“I think Zelenskiy has a real desire to re-integrate the non-government-controlled territory ... but I don’t see any real strategy with this TV channel or other things,” he adds.

Enrique Menendez, who ran an advertising agency in Donetsk until 2014 and then co-founded an NGO, also fears that Zelenskiy’s good intentions are not being shaped into clear policies.

“I didn’t vote for him but I felt for the first time like ‘This is my president’,” Menendez says of Zelenskiy’s new year speech.

Zelenskiy and Russian president Vladimir Putin have agreed on prisoner exchanges and the withdrawal of troops from stretches of the frontline. But there has been no significant implementation of the framework peace accord approved by Putin and Zelenskiy’s predecessor, Petro Poroshenko, in Minsk in 2015.

“They are doing a lot of small steps and PR but they won’t agree changes on the political track, and so there will be a frozen conflict,” says Menendez, who was expelled from Donetsk in 2016 and now leads Ukraine’s Regional Policy Institute.

“Most Ukrainians would accept that kind of peace in Donbas. But people living on both sides of the frontline and in nearby regions would not,” he says.

“Every frozen conflict zone has the potential to become hot again ... and a frozen conflict would not give the region a chance to redevelop economically and attract investment. It wouldn’t be a sustainable peace with political solutions.”

For all his desire to end the war, Zelenskiy is pinned between Russia’s refusal to revise the Minsk deal and Ukrainians’ rejection of unfavourable terms that Poroshenko reluctantly accepted to stop a battlefield rout in winter 2015.

If implemented in current form, the Minsk accord could allow the separatists to legalise their control over swathes of Donbas and embed Kremlin influence there before Ukraine was even permitted to retake full control of its border with Russia.

“There is no clear answer in Ukraine about what we want to have in Donbas. Are we ready to reintegrate a region with a mostly anti-government or anti-Ukrainian population, heavily influenced by the Russian world?” says Mykola Kapitonenko, an expert at the International Centre for Policy Studies in Kiev.

“I believe managing a conflict like this demands firstly resolving hard political and security and military issues,” he adds. “So the first thing we have to do is remove the Russian presence at some price. After that we should proceed to reintegration. This sequence cannot be changed, so I don’t see a reason for winning the minds of people living there now, with TV channels or whatever else.”

Russia will not leave until it has extracted what it considers to be an adequate price from Ukraine and secured its strategic interests, warns Kapitonenko, who acts as a consultant to the Ukrainian parliament’s foreign affairs committee.

And Putin is prepared to wait to get what he wants.

“We have lots of contacts with the Russians at expert level and they are pretty sure that sooner or later this will work out,” says Kapitonenko.

“They don’t have to hurry. It is Zelenskiy who has to fulfil his promises about delivering peace to eastern Ukraine.”