WHO experts arrive in China to investigate coronavirus outbreak

Cases outside China ‘could be the spark that becomes a bigger fire’, WHO chief warns 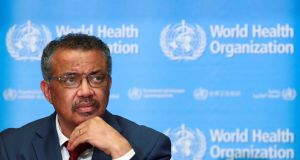 Mr Tedros, who met Chinese president Xi Jinping in Beijing last month, returned with an agreement on sending an international mission. It took nearly two weeks to get the green light from the Chinese government on the team, led by Canadian emergency expert Dr Bruce Aylward.

“Bruce and his colleagues will be working with their Chinese counterparts to make sure we have the right expertise on the team to answer the right questions,” Mr Tedros told a news conference.

“We hope the rest of the team will join them as soon as possible. The team could range between 10 and 15,” he said, giving no details on their identities.

There have been 40,235 confirmed cases reported in China and 909 deaths, he said.

Mr Tedros voiced concern at limited incidents, reported by European authorities at the weekend, of person-to-person spread of the virus by people with no history of travel to China.

“In recent days, we have seen some concerning instances of onward transmission from people with no travel history to China, like the cases reported in France yesterday and the United Kingdom today,” he said.

“The detection of this small number of cases could be the spark that becomes a bigger fire. But for now it’s only a spark. Our objective remains containment.”

Dr Mike Ryan, the WHO’s top emergencies expert, asked about an international business meeting held at a Singapore hotel on January 20nd-22rd, said it did not appear to have spread the virus widely.

“No, I think it is way too early and much more of an exaggeration to consider the Singapore conference event a ‘super-spreading event’,” Mr Ryan said.

There are about 40 confirmed cases in Singapore, including 21 associated with import from China and 19 locally acquired with no history of travel, he said.

“The Singapore conference cluster has 12 cases associated with it. Those five in France, the three in Singapore itself, and then [South] Korea, Malaysia and the United Kingdom,” Mr Ryan added, noting that those figures were in the single digits.

“So are we not dealing here with a super-spreading event, people are comparing it to the Amoy Gardens or to the Metropole hotel,” he said, referring to the Sars outbreak in 2002/2003.

Mr Tedros urged countries to take public health measures to help “prevent a bigger fire”, adding: “This is a message for the whole world. This is a common enemy that we can only defeat if we do it in unison.” – Reuters