Maureen Dowd: Internet is field of battle for US oligarchs 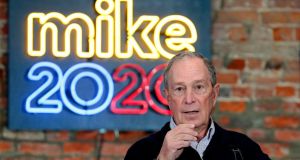 Democratic presidential hopeful Michael Bloomberg: A spokeswoman punched back about Donald Trump: “He is a pathological liar who lies about everything: his fake hair, his obesity and his spray-on tan.” Photograph: Jeff Kowalsky

In a meta master stroke, Tina Fey made an epic teen movie, Mean Girls, in 2004, then turned it into a Broadway musical and is now making a movie out of the musical. She should do her first casting call here. Politics has never been filled with so many mean girls.

Many rivals have struggled to spar with Trump in debates and on Twitter but have found it difficult, demeaning and self-destructive to sink to his level. They don’t seem authentic when the claws come out and the fur flies. Who can forget Marco Rubio stooping to a joke about Trump’s penis size and then apologising, saying it wasn’t really who he was? Another example of a rival getting unbalanced by Trump’s bullying: Hillary still wonders if she should have wheeled around, when Trump was lurking behind her on the debate stage and making her skin crawl, and said, “Back up, you creep, get away from me.” She overthought it, fearing she would come across as overwrought.

Bloomberg, however, has no such qualms. He can be a bitch when he wants to be. (And certainly, he has got in trouble crossing the line on offensive comments to female staffers and on stop-and-frisk.)

When Bloomberg was asked recently about the clash of the billionaires, he snapped back: “Who’s the other one?” Trump, who tweeted in 2012 that Bloomberg was doing a great job as mayor of New York, is now scratching Bloomy’s eyes out. (The president’s post-acquittal megalomania and tweets about softening Roger Stone’s punishment have spurred Bill Barr and Republican senators to urge Trump to cut down the bullying, incendiary tweets. King Donald tweeted back that he can do as he likes. In the spirit of the Brangelina split, conservatives are now left agonising about which of their stars to support – Trump or Barr.)

When Bloomberg was asked recently about the clash of the billionaires, he snapped back: “Who’s the other one?”

The president has been on a prolonged tweet rant about “Mini Mike” and his “vanity project” claiming his “loser” billionaire rival with “zero presence” wants to stand on a box at the debates. A Bloomberg spokeswoman punched back about Trump: “He is a pathological liar who lies about everything: his fake hair, his obesity and his spray-on tan.” (Michael Dukakis did stand on a specially built mound.)

This past week, Trump tweeted that “Mini Mike is a 5’4” mass of dead energy,” to which Bloomberg trash-tweeted back: “We know many of the same people in NY. Behind your back they laugh at you & call you a carnival barking clown. They know you inherited a fortune & squandered it with stupid deals and incompetence.”

As Charlie Warzel wrote in the Times opinion section, “On Twitter, where some Democratic hopefuls have adopted a ‘they go low, we go high’ mentality, Bloombergians have instead opted to wade into the mud and wrestle with Mr Trump’s Twitter feed.”

Bloomberg has dumped more than $188 million into his campaign so far, including a million dollars a day on Facebook ads. A chunk has been thrown at an innovative digital campaign that taps legions of Instagram’s most prolific meme-makers to flood social media with ironic jokes designed to make the 78-year-old Bloomberg seem hip and to get millennials talking about him.

Trump invited a bunch of these masters of vicious trolling, conspiracy theories and doctored videos to the White House – an ogre with all his digital goblins kickin’ it in the cave

The two candidates who inspire the greatest number of memes and web warriors are, funnily enough, two of the oldest men ever to run for president, Bernie Sanders (78) and Trump (73). And they don’t have to pay for their meme-makers. “Bloomberg’s memes are comical in the worst possible way,” said Sarah Matthews, deputy press secretary for the Trump campaign. “Paying for internet influencers and memes proves you don’t understand how meme culture works. President Trump’s supporters create content for free out of genuine love for the president.”

And the president loves his meme-meisters back. Last summer, he invited a bunch of these masters of vicious trolling, conspiracy theories and doctored videos to the White House for a festive social media summit – an ogre with all his digital goblins kickin’ it in the cave.

“The Trumpistas have been buying social media exposure for years,” said Tim O’Brien, a Trump biographer and former Bloomberg reporter who now is a senior adviser to the Bloomberg campaign. “It’s the only tactic that they actually stay focused on and try to build a strategy around. The idea that there is some grassroots movement funding this is silly.”

There’s no question that it’s going to get really nasty as these two oligarchs go at it, now that the nastiest place ever – the internet – has become the foreground of political campaigning. The real question is: Who can make fetch happen?