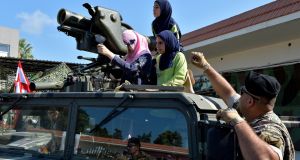 Lebanese girls look at an anti-armour TOW2 rocket mounted on a Lebanese vehicle during an open day between the Lebanese army and UN peacekeeping troops in the southern port city of Tyre, Lebanon. Photograph: Wael Hamzeh

Israel has released information on what it described as a secret joint project being carried out by Iran and Hizbullah in Lebanon with the aim of arming the Shia group with hundreds of precision-guided missiles.

The rare release of classified intelligence information included the names of high-ranking Iranian and Hizbullah officers who were said to be in charge of the project.

Prime minister Binyamin Netanyahu said Israel was resolved to foil this “dangerous” project. “The goal of going public is to make it clear that we will not sit by and let our enemies use lethal weapons against us. I’m telling our enemies: watch your step,” he said.

The release of the information came only a few days after a mysterious drone attack on the Beirut neighbourhood of Dahiya, a Hizbullah stronghold, blamed by the organisation on Israel. It was later revealed that an Iranian-made machine weighing more than eight tonnes was damaged in the attack. Its role was to mix solid fuel – an essential stage in manufacturing precision-guided missiles.

Lebanon described the incident as an act of war and on Wednesday Lebanese troops fired at an Israeli drone close to the border. Hizbullah threatened revenge for the Beirut attack.

The high alert on Israel’s northern border following the Hizbullah threats continues. The army has cancelled leave for soldiers in combat brigades in the area and has beefed up its forces in intelligence, air defence and home-front command units.

The United Nations Security Council has called on all sides to display maximum restraint and avoid any course of action or statements that are liable to undermine stability, warning that any violation of the agreements that ended the 2006 second Lebanon war is liable to spark a new conflagration.

The council decided unanimously on Thursday night to extend the mandate of the 10,500-strong UN peacekeeping mission in southern Lebanon, Unifil, for another year. Ireland is one of the more than 40 countries contributing to Unifil, providing 475 soldiers.

The resolution urged all parties “to ensure that Unifil’s access to the blue line border with Israel in all its parts is fully respected and unimpeded”.

Acting United States ambassador to the UN Jonathan Cohen called for Unifil’s unimpeded and timely access to the entire UN-drawn border between Israel and Lebanon.

Eight months after Israel’s discovery of Hizbullah tunnels, he said that Unifil still could not access the tunnels on the Lebanese side “because Lebanese leaders have not directed their armed forces to investigate suspected sites” with the UN peacekeepers.

Israeli ambassador to the UN Danny Danon said the resolution sent “a clear message to the Lebanese government: restrain Hizbullah”.

Israel’s foreign ministry issued a statement expressing appreciation for international efforts to strengthen Unifil, but said the peacekeeping force was incapable of doing its job because of what it described as the restrictions imposed by Hizbullah and the Lebanese authorities on its activity. If these restrictions remained in place, Unifil’s relevance would be in doubt, the foreign ministry statement said.