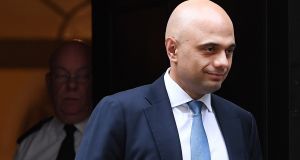 A furious Sajid Javid confronted Boris Johnson on Friday and demanded an explanation of why his media adviser was sacked without his knowledge, amid claims that a “culture of fear” has taken hold within the British government.

Sonia Khan, Mr Javid’s media adviser, was escorted from No 10 by an armed police officer after a meeting with Mr Johnson’s top strategist, Dominic Cummings, in which she was accused of being dishonest about her contact with the former chancellor Philip Hammond and one of his ex-advisers, who have been trying to block a no-deal Brexit.

Ms Khan is the second adviser working for Mr Javid, the chancellor of the exchequer, to be sacked by No 10. She is also the fourth young woman in a month to be axed from the prime minister’s network of advisers and senior staffers.

Mr Javid demanded the meeting in support of his adviser and it is said he will not let the matter drop. But there are increasing suggestions that he is becoming isolated from the core of the Johnson regime.

Mr Javid’s first major speech on the economy was cancelled 24 hours before he had been due to deliver it in Birmingham this week. Downing Street, rather than the Treasury, announced a proposed cut to fuel duty that had been briefed to the Sunday papers.

Mr Javid is now without a media adviser before next week’s spending review, one of the biggest announcements of the financial year, where he will lay out details of a £14 billion (€15.5 billion) allocation for schools over three years and new police funding.

Shortly after news broke of Ms Khan being marched from No 10, it was speculated that the reason for her departure was the leaking of the government’s no-deal Brexit preparation strategy, Operation Yellowhammer. Downing Street later clarified that she was not the source.

Ms Khan was said to have been deeply shaken by her sacking and her police escort as she left No 10. The acrimony over her very public sacking – the result of Mr Cummings’s zero-tolerance approach to alleged leaks from special advisers – will be seen by Mr Johnson’s critics as an echo of the government’s decision to drive through the prorogation of parliament this week and indicative of the extent of Mr Cummings’s expanding role.

Both Mr Cummings’s approach to running Downing Street and the perception that Mr Johnson is trying to limit debate on Brexit have led to criticism of a governing style devoid of consultation. And it is understood that even at the top of government there is growing concern about the potential reputational damage being done by the recent clearout of female advisers.

Three other women in senior advisory, policy and organisational roles in the Conservative party have left since Mr Johnson became prime minister.

A former Whitehall staffer who worked under Theresa May’s administration said: “There is a now a climate of fear operating in government that Dominic Cummings is trying to create. The fact they had her marched out the front door by a police officer – they clearly wanted to make an example of her. I think he knows that she’s absolutely not guilty of what she is supposed to be guilty of.

“There are now Spads [special advisers] who cross the road not to be seen with me. People are genuinely afraid to speak to me. That’s how bad this culture of fear has got.”

A No 10 spokesman said: “We don’t comment on individual staffing and personnel matters.”

A fiery exchange between Mr Cummings and Ms Khan is understood to have revolved around whether she had contact with a former Hammond staff member. It is understood Ms Khan was asked to hand over her work phone, and also presented her personal phone to Mr Cummings.

Downing Street made clear that Ms Khan was not being blamed for the leak of documents on no-deal planning. A senior government source said: “Sonia Khan was not responsible for the Yellowhammer leak.”

Whitehall sources confirmed that the reason Ms Khan was dismissed on the spot was because she had been in contact with people working with a group of Conservative politicians trying to block a no-deal Brexit, and over the claim that she had lied about her contact with them.

But a source close to her said: “She was asked about her contact with her former colleague, she said she had seen the person socially quite recently in Westminster – hardly some discreet part of London. She was open about it and handed over both her phones. There’s no law about speaking to former colleagues.

“He then said ‘you’re fired’. Sonia is a dyed-in-the-wool Brexiteer, a passionate leaver – she was loyally behind the view of the government and delivery of Brexit.”

It emerged that there were no witnesses to her sacking by Mr Cummings, who spoke to her in an office in Downing Street close to the prime minister’s. A former Whitehall source said: “She wasn’t offered to take anybody with her and she wasn’t told what the meeting was about.”

A senior ex-civil servant said they would have expected a representative from Whitehall or Downing Street human resources to be present if the meeting was to involve a special adviser’s dismissal.

Sources close to the government have described an emerging pattern of “opaque and shocking” dismissals, not always involving a clear explanation of what the person is said to have done wrong. One Tory insider said the way some former staffers had been treated by No 10 was “horrific”.

A former Whitehall staffer said: “This has been about brand identity, and the whole “we are in charge” thing. I can’t see there’s anything strategic or tactical to be gained by the big boys at No 10 for treating someone this way.”

The shadow chancellor, John McDonnell, was among the critics of how Mr Cummings had effectively undermined the chancellor and the Treasury. He tweeted: “Would be better if Dominic Cummings came along next week to present the spending review as he’s obviously in charge of the Treasury as well as No 10.

“If you can’t speak without his permission and can’t even decide your own staffing, you’re hardly the chancellor.” – Guardian