‘A pressure cooker about to explode’ – tensions run high in Kashmir 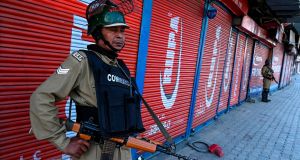 Security personnel stand guard in front of closed shops in Srinagar, as a tense lockdown in the region of seven million residents continued. Photograph: Tauseef Mustafa/AFP

Tension remains high across India’s northern disputed Jammu and Kashmir state, three weeks after the federal government revoked a special constitutional statute that guaranteed it autonomy and imposed a security and communications lockdown.

Officials in New Delhi concede that, since the August 5th fiat that split Jammu and Kashmir into two federally administered territories, the situation in the restive region is far from normal.

In the last three weeks scores of civilians and security forces personnel have been injured in some 250 stone-pelting incidents, mostly in Kashmir’s summer capital Srinagar, and police have resorted to using tear gas to disperse protesters.

According to news reports from Srinagar, some 152 civilians have suffered injuries from tear gas shells and riot control pellet guns, while another 56 paramilitary personnel have been hurt and 25 of their vehicles damaged in these clashes.

We are angry; our identity has been snatched away from us

The government has so far provided no data on the injured, but it claimed there have been no deaths over three weeks of demonstrations in a region where more than 70,000 people have died in an armed insurgency that erupted in 1989.

Local officials in Srinagar claim that the numbers injured in clashes is far higher than official figures, but are unable to provide credible data.

Meanwhile, hundreds of Kashmiri politicians, including two former chief ministers, remain under arrest and almost all commercial establishments in Srinagar and most other towns across Kashmir are still closed in protest at the federal government’s actions.

“We are angry; our identity has been snatched away from us,” an unnamed Srinagar resident told the Indian Express newspaper on Saturday, adding that the continuing clampdown on mobile phone networks and internet services exacerbated the situation.

Another local said that a majority of Kashmir’s more than 7 million residents were “voluntarily” participating in a “civil curfew”, in which they had pledged not to venture out of the safety of their homes, despite assertions of “normality” by the authorities.

Although Kashmir’s administration ordered the reopening of all schools a week ago, most remained empty, as neither students nor teachers were willing to attend under such circumstances.

“What if something happens and we cannot contact our kids or the school?” one parent told the Express.

Normally traffic-choked roads in the region have been deserted, even though no formal curfew is being enforced, and people have complained that they are continually stopped and harassed by heavily armed security men and being frisked, questioned and detained for hours.

There are innumerable media accounts of people not making it to hospitals in time and of relatives being unable to bury their dead in cemeteries in Srinagar and other smaller towns across the Kashmir Valley.

If the situation is normal then why is the government restricting us from entering the [Kashmir] Valley?

“The situation in Kashmir today is like a pressure cooker about to explode,” said a senior federal security official in Delhi, declining to be named.

In the meantime, Indian opposition leaders including Congress Party head Rahul Gandhi were barred by the local authorities from leaving Srinagar airport over the weekend, fearful that their presence would further stoke tension in the city.

“If the situation is normal then why is the government restricting us from entering the [Kashmir] Valley?” asked Mr Gandhi on Saturday, adding that on the one hand the government says things are normal and on the other they impose restrictions.

Prime minister Narendra Modi’s Hindu nationalist Bharatiya Janata Party government believes that withdrawing Kashmir’s special privileges, such as exclusive land rights and government jobs reserved only for locals, will economically expand the region and integrate it with the rest of India.

Pakistan, which seized a third of Kashmir after independence from colonial rule in 1947 and lays claim to the two-thirds under Indian control, has condemned Mr Modi’s decision and approached the United Nations to make India rescind it.

India has categorically refused, claiming that Kashmir is “exclusively” an internal matter.

1 UK to close borders to non-English speakers and unskilled workers
2 New Sinn Féin TD apologises for ‘glib, off-the-cuff tweets’
3 A Russian cruiser with ‘cannibal rats’: What other ‘ghost ships’ could be out there?
4 Jump in young Irish adults living with parents among highest in EU
5 Draining the swamp? Trump in spree of clemency for rich white men
Real news has value SUBSCRIBE