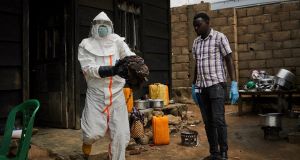 A health team disinfects and decontaminates the home of an Ebola patient who was admitted to a treatment centre the previous day in Ngongolio, Beni, North Kivu province, Democratic Republic of the Congo. Photograph: EPA

The number of deaths in a year-long Ebola outbreak in eastern Democratic Republic of the Congo (DRC) are expected to reach 2,000 this week, as healthcare workers say they hope the disease can be stamped out within six months.

The Ebola outbreak in the central African country began in August 2018, and has since become the second largest in recorded history. Efforts to control it have been hampered by conflict and widespread mistrust among Congolese communities, who often question the motivations of government authorities or international aid organisations.

Ebola is a deadly disease transmitted through bodily fluids. Symptoms include a high fever, nausea and headaches, and death can be caused by severe dehydration or organ failure.

Recently in the DRC there have been allegations of the misuse of public funds. The DRC’s health minister Oly Ilunga resigned last month, and has since been questioned over the use of money earmarked for the Ebola response, as part of an ongoing inquiry. Mr Ilunga said he resigned in part because he was worried about new, unlicensed vaccinations, which he called an “experiment”.

A vaccine produced by German company Merck has already been given to approximately 170,000 people, while the World Health Organisation is calling for the introduction of another vaccine, made by Johnson & Johnson. Both vaccinations are unlicensed, though the Merck vaccinations have passed the testing stage.

Gwen Eamer, a senior officer with the International Federation of the Red Cross, said the DRC Ebola response is the most complex operation many medical staff have worked on in a long time. While they’re hoping the outbreak will be over within six months, there are no guarantees, she said.

Comparing this to the west Africa outbreak between 2014 and 2016, which caused more than 11,300 deaths, would be like “comparing apples and oranges”, Ms Eamer added.

“There are many things that make this outbreak fundamentally different.” She said it was detected when there were much fewer cases and that there have been scientific breakthroughs in terms of prevention and treatment.

“All these things change the risk of transmission. You’re less likely to be out in the community passing it along,” she said. “We’re changing the way in which the disease is spreading from person to person.”

Negating those advances is ongoing conflict across the affected region. Dozens of armed groups remain active in eastern DRC. Ms Eamer said that meant “you have all the social impacts of violence, conflict and mistrust which fuels the epidemic”.

She said healthcare workers are trying to build confidence but it’s a slow process. “It’s an ongoing process in the sense that trust is something you build continually and reinforce continually, it has to be a process with two-way communication.”