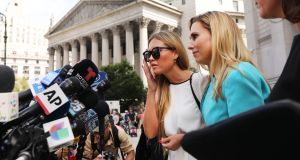 Jennifer Araoz (32) claims Jeffrey Epstein raped her in his New York townhouse in 2002 when she was only 14, speaks to the media with her lawyer after leaving a New York court house following a hearing. Photograph:Spencer Platt/Getty Images

One by one, the women walked up to a podium in a federal courtroom in Manhattan on Tuesday, finally given the opportunity to speak in a formal proceeding about the man they said abused them.

The man, Jeffrey Epstein, was not there, having killed himself in jail two weeks ago. Yet more than a dozen of his accusers showed up at a hearing on dismissing the indictment to tell their stories, to talk about the distress they had endured and a criminal justice system that they said had failed them.

Many said they were angry that Epstein’s suicide robbed them of the chance to confront him in court. “For that, he is a coward,” said one of his accusers, Courtney Wild. “I feel very angry and sad,” Wild said. “Justice has never been served in this case.”

Several of Epstein’s accusers spoke about how they had been coerced at a young age into having sex with him for money, then were pressured to continue seeing him. “These are things that so many girls can relate to,” said one of the women, speaking anonymously. “Change needs to happen.”

Another woman, who spoke anonymously, said Epstein had victimised her a second time by taking his own life. “It felt like new trauma all over again,” she said. Others, like actress Anouska De Georgiou, said they were appearing in court out of a spirit of solidarity. “I am every girl he did this to, and they are all me,” she said, “and today we stand together.”

Several of the women turned to prosecutors during their remarks and urged them to continue investigating Epstein’s employees and associates who they said had helped lure them into Epstein’s scheme. Prosecutors assured the court the investigation would continue into others who are believed to have aided Epstein in his long-running sex-trafficking scheme, helping to procure dozens of teenage girls and women.

Judge Richard M Berman scheduled the hearing Tuesday after federal prosecutors wrote to him last week saying that in light of Epstein’s death they planned to drop the criminal charges against him – a decision that requires a judge’s approval. Noting the intense public interest in the case, he invited victims to speak. – New York Times