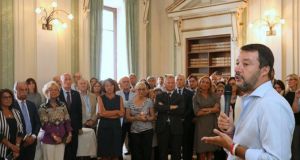 Matteo Salvini has called on his supporters to descend on Rome as Italy moves towards ousting his far-right League from power after his attempt to collapse the Italian government and force snap elections.

Mr Salvini earmarked October 19th for a “peaceful day of Italian pride” against a potential new government made up of his former ally, the anti-establishment Five Star Movement (M5S), and the centre-left Democratic party (PD).

“From north to south, from the silent majority – a day of mobilisation for those who don’t want a government born overnight in Brussels, ” he said in an announcement on Facebook.

Mr Salvini, who is still nominally the interior minister, has accused Brussels and Berlin of plotting to eject the League from government, taking particular aim at the EU’s budget commissioner, Gúnther Oettinger, who said a M5S-PD tie-up was “great news” for Italy and the EU.

“But they won’t get rid of the Salvini and League ballbreakers so easily,” Mr Salvini said.

Mr Salvini has also planned a series of rallies across Italy before the Rome demonstration, while his far-right ally, the Brothers of Italy, has urged people to take to the streets beforehand.

The Italian prime minister, Giuseppe Conte, was given a fresh mandate on Thursday to try to secure a pact with M5S and the PD in an effort to stave off early elections.

Mr Conte said now was “a time for relaunch” while insisting Italy return to being a “protagonist” in the EU.

Mr Conte has until next week to ensure the two sides set aside their myriad differences to create a strong and lasting government. They still need to draft a programme, pick a cabinet and establish what role Luigi Di Maio, the M5S leader, will play. The PD insisted he step down as deputy prime minister in return for them accepting Mr Conte as prime minister.

Another of the PD’s stipulations for the deal is M5S, which has long been antagonistic towards the EU, commit to remaining in the bloc and scrapping a draconian anti-immigration Bill passed with the League.

A potential threat is the plan by M5S to ask its members to vote on any agreement with the PD on Rousseau, the online network it often uses to make policy decisions. It is unclear how many subscribers the site has or how votes are counted, but many M5S activists oppose the alliance.

If they manage to form a government, among the first challenges will be drafting Italy’s budget for 2020 and averting an increase in VAT.

“If they can survive that, they might try to go for the long run,” said Franco Pavoncello, a political science professor and the president of the John Cabot University in Rome.

“Also because they might be interested in making an electoral reform that could restrict Salvini, as well as shoot for 2022, when a new president has to be elected. Both parties have an interest to stick around. But this is way into the future.” – Guardian