After first saying he was pulling out all US troops, Trump has bowed to pressure 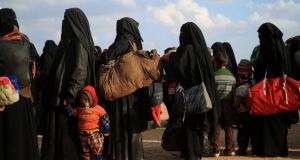 Washington’s plan to retain a small group of peacekeeping troops in Syria is a tactical reversal of US president Donald Trump’s strategic decision to withdraw all US forces from that country now that the Islamic State terror group has lost its territorial base.

Under strong pressure from Congress and his generals, Trump agreed that 400 troops would be deployed for an unspecified period once 2,200 pulled out at the end of April.

Half the peacekeepers being retained are to patrol the Syrian-Turkish border with the aim of preventing clashes between US-supported Syrian Kurdish fighters and Turkish troops, while the remainder will be stationed at a US base in the south on the Syrian-Jordanian border.

The token deployment does not meet the Kurds’ demand for a foreign force of 1,500 to interpose between their fighters and the Turkish army. Washington had suggested that Western and Arab governments could dispatch troops for such a mission, but so far none has offered contingents.

Trump announced both the decisions to withdraw and retain a slim presence following phone calls with his Turkish counterpart, Recep Tayyip Erdogan, who has threatened to drive the Syrian Kurdish People’s Protection Units (YPG) from a 30-km wide “safe zone” in northern Syria.

For Trump and Erdogan the continuing presence of US troops could be a face-saver: Trump would honour his pledge to pull out the main body of troops and Erdogan could postpone his oft-promised military intervention.

The UK and France have refused the Trump administration’s request to replace departing US forces but might contribute peacekeepers for as long as the US does, creating a red, white and blue line between Turkey’s red flags and the Kurds’ yellow banners.

While Britain’s ministry of defence refuses to comment on the number of UK special forces deployed in northern Syria, France has 1,100 troops there.

A Turkish “safe zone” on the Syrian side of the border would create fresh complications in the already-complex situation in Syria. Kurdish and Arab residents of the area could flee if the YPG is expelled. Erdogan proposes to settle hundreds of thousands of the 3.6 million Syrian refugees hosted by Turkey in the zone, which would be connected to Turkish utilities and services.

Kamal Alam, a visiting fellow at London’s Royal United Services Institute, told Al-Jazeera that the two Syrian areas occupied by Turkey in 2016 and 2018 look “like a state within a state. Syria has rightly called this a violation of the UN Charter.”

Russia and Syria say that the Syrian army must deploy along the Turkish border and reassert control of the vast area held by the Kurds, who did not join the insurgency against the government in Damascus. In exchange for such a deal, the Kurds demand autonomy in a federal state.

Damascus contends strong central rule must be re-established to reunify the country and argues that Turkey will not accept a Kurdish autonomous zone, as this could encourage Turkey’s Kurds to step up their violent self-rule campaign. In 2003-04 Turkey opposed the creation of a Kurdish autonomous region in Iraq for the same reason. Ankara is in no mood to be ignored a second time.

The US also opposes Turkish military action and has vowed to protect the YPG. However, Washington and Ankara agree that the Kurdish-controlled 25 per cent of Syria should not return to Damascus for the time being.

Both want to use this territory as leverage to force Syrian president Bashar al-Assad to step down, although this would be strongly resisted by his allies Russia and Iran, which have pledged not only to ensure his tenure but also to restore all Syrian territory to Damascus’s rule.