Delayed presidential election marred by violence projected to be tight 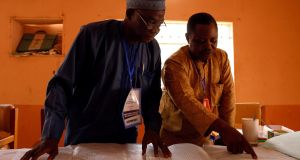 As many as 35 people were killed in election violence in Nigeria civil society groups said on Sunday after voters went to the polls in a tight presidential race between president Muhammadu Buhari and businessman Atiku Abubakar.

The groups said the death toll during Africa’s biggest election were higher than that of the 2015 poll during which the only major incident was a Boko Hararm attack that killed more than a dozen people.

Past polls have been marred by violence and vote rigging.

Police did not immediately respond to phone calls and text messages seeking comment.

Mr Buhari (76) a former military ruler who is seeking a second elected term at the helm of Africa’s top oil producer on an anti-corruption platform, faces Atiku (72) a former vice-president who has promised to expand the role of the private sector.

Festus Okoye, an Independent National Electoral Commission official, said some people were killed in the southern states of Rivers, Lagos and Oyo, but he could not confirm any figures.

A handful of polling stations remained open on Sunday to allow more Nigerians to vote, after the violence, delays in opening poll centres and malfunctioning systems in various states interrupted voting the previous day.

Voters had queued late into the night on Saturday in a few areas of Africa’s most populous nation where polling stations had opened late or ballot machines malfunctioned.

Nearly 73 million eligible voters cast their ballots from a pool of more than 70 presidential candidates in an election which was postponed the previous Saturday, just hours before it was due to begin, due to logistics.

It was not clear when the outcome of the results would be announced.

“Everything is going on well with the count,” said Mr Okoye. “From Tuesday onwards we should have a substantial number of results.”

Both Mr Buhari, the flagbearer of the All Progressives Congress and Mr Atiku, who represents the People’s Democratic Party, expressed confidence that they would win the election.

The rest of the presidential candidates lack access to funds available to Mr Buhari and Mr Atiku through their parties, which have governed Nigeria since military rule ended in 1999, and are unlikely to make an impact at the polls.

“The best candidate must emerge and people’s opinion must count,” said Asiwaju Ola, a businessman in the capital Abuja.

Mr Buhari’s northern Kano state stronghold was one of the key battlegrounds in the closely-fought election.

“It will be bitter if Atiku wins but we will have to accept it,” Ali Adamu (50) a driver in Kano said.

The contest between Mr Buhari and Mr Atiku hinges on revamping an economy struggling to recover from its first recession in 25 years, which it slipped into in 2016 and emerged from in 2017.

Nearly a quarter of the workforce is unemployed, while the cost of living has also risen rapidly, with inflation of 11.37 per cent in January – just short of a seven-month high reached the previous month.

Mr Buhari has focused his campaign on rooting out corruption, but critics say there have not been any significant convictions in his first term.

Mr Atiku has said he would aim to double the size of the economy to $900 billion (€794bn) by 2025, if elected, but has for years been dogged by corruption accusations, which he denies.

To be declared winner, the candidate with the most votes must have at least one quarter of the vote in two-thirds of Nigeria’s 36 states and the capital. Otherwise there is a run-off. – Reuters