Dead calm: Brexit not in top 10 of German businesses’ priorities

Is the uncharacteristic sangfroid in the face of Brexit based on mistaken assumptions? 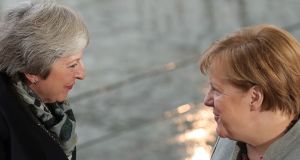 With five weeks to March 29th, Germans are worried – about everything but Brexit.

Brexit features in the media, but in far less detail and frequency than in Ireland. Among politicians and business leaders, their attitude and utterances about the UK on Brexit haven’t changed since 2016: shame, but let them go.

An Irish business delegation, led by former taoiseach Enda Kenny, had a rendezvous with this German reality at a recent breakfast in Berlin with Bundestag MPs.

Compared with Ireland, Germany has neither the same economic nor emotional ties to the UK. If German companies are worried about Brexit, they are hiding it well.

Most managers agree with their politicians and are loath to allow any UK cherry-picking that might endanger the single market. This position, presented as europhilia, is mostly bottom line: Germany is by far the greatest beneficiary of the single EU trading bloc, and that is far more valuable to them than the UK market.

Energetic Irish diplomacy – and regular political visits from Dublin – have embedded in German minds the potential risks to the Northern Ireland peace process should Berlin wobble on Brexit.

“The reason the Germans aren’t saying anything on Brexit is because, when you look at it from this distance, nothing has actually happened,” said one senior Irish source.

Not even a weekend economic report with a horror headline – Brexit puts 100,000 German jobs at risk – got people into a flap. Why not?

“I don’t know why Germany, all in all, is so relaxed about this,” says Prof Oliver Holtemöller, of the think tank IWH in the eastern city of Halle, and author of the report. “Perhaps because many assume a sensible solution will be found by March 29th, or because people expect short-term disruptions rather than a long-term trade conflict.”

Three years ago, after the Brexit vote, German chancellor Angela Merkel warned business leaders not to break rank on Brexit. That line has held, even in the influential car industry. Brexiteers hoped German car managers, fearful for their supply-chain links with the UK, would rally to their side in a last-minute intervention with German politicians.

As March 29th looms, however, German car executives’ minds are instead focused on avoiding punitive US tariffs on their products.

German SMEs are the backbone of Europe’s largest economy, but just a quarter say they feel well-prepared for Brexit. The Welt daily, impressed by the uncharacteristic calm, write about “Cool Germania”. But the same calm terrifies others.

Prof Gabriel Felbermayr, head of the IfW economic institute in Kiel, warns against the “naive optimism” that the British will agree to everything at the last minute.

Where others see comforting unity in the EU against Britain, he sees a “shocking” dearth of ideas and forward-thinking.

The EU’s single-minded pursuit of the existing Brexit deal, if it fails to meet approval in Westminster, “is worth nothing”.

“I would recommend the Irish put creative solutions on the table to avoid a hard border and make it easier for the British to agree,” he said.

For his part, Prof Felbermayr has proposed a “hard but smart” Brexit, creating an additional, looser customs arrangement outside the existing customs union, similar to the one the EU has with Turkey. This would be acceptable to Britain, he suggests, by keeping it linked to the EU while preserving its territorial integrity.

That proposal has been taken up enthusiastically by the British tabloids and the German far-right, he says, but has met with friendly disinterest in Berlin.

When Merkel made her own call for “creative” solutions on the Irish backstop, her spokesman insisted it was not an attempt to force Dublin to compromise.

“From the start as the EU27 we have had in our heads the particular Irish interest to avoid a hard border between the Republic and Northern Ireland,” said government spokesman Steffen Seibert. “The Irish side is part of the EU27.”

As B-Day nears, Ian O’Hora, an IDA director based in Frankfurt, says ongoing Brexit uncertainty has not dimmed European interest in Ireland. Quite the opposite: investment was up 24 and 25 per cent in the past two years respectively.

In Germany he sees a consistent calm, similar to that he encountered on a recent tour of its neighbours Switzerland, Austria, Poland and the Czech Republic.

“There is a good consistency right across the marketplace,” he said, “with companies keen to see a resolution, preferably a positive one, because nobody wants a hard Brexit.”

GERMANY AND BREXIT: IN NUMBERS