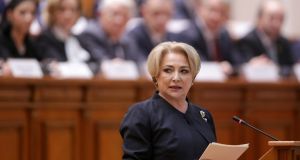 Romanians held demonstrations on Sunday and judicial staff across the country prepared to stop work, in protest against sweeping reforms that they say tighten government control over the courts and weaken the fight against corruption.

Thousands of people joined rallies in Bucharest and other towns and cities on Sunday night, to demand that their populist government reverse changes that the European Union fears could undermine the rule of law in Romania, which holds the presidency of the bloc.

Since taking power two years ago, the Social Democrats (PSD) and their allies have decriminalised some graft offences, forced through the dismissal of chief anti-corruption prosecutor Laura Codruta Kovesi and created a new unit led by government loyalists to investigate – and allegedly intimidate – magistrates.

The changes could benefit key PSD figures such as party chief Liviu Dragnea, whose convictions for vote rigging and abuse of office currently bar him from being prime minister, although he effectively runs the cabinet from the wings.

The government sparked fresh anger last week, when it used its latest emergency decree to change the rules for naming top prosecutors and to weaken oversight of the unit for investigating magistrates, which is now pursuing a case against Ms Codruta Kovesi that critics say is politically motivated.

The government also introduced a new process for choosing Romanian candidates to lead the European Public Prosecutor’s Office (EPPO), in a bid to stop Ms Codruta Kovesi getting a job for which an EU selection panel recommended her.

In response, judges, prosecutors and magistrates in Bucharest and several other cities said they would halt work from Monday except in urgent cases.

“Sudden changes made to judicial laws through an emergency decree...have a major impact on the ability of the overall prosecuting body to fulfil its constitutional duties,” Bucharest prosecutors said in a statement last Friday, when hundreds of judicial staff protested outside courthouses around the country.

The government insists it is simply trying to make Romania’s judicial system more fair and efficient. Prime Minister Viorica Dancila said she would meet leaders of magistrates’ associations on Monday to discuss the disputed reforms.

Romanian president Klaus Iohannis accused the PSD of “again acting contrary to justice and the rule of law, against Romania and its citizens”.

“The PSD government wants to use emergency decrees to create special status for people with legal problems. Romanians and European leaders know that there is no justification for this obsession with weakening Romanian justice... other than personal interests,” he added.

Margaritis Schinas, a spokesman for the European Commission, said last week it was “following with great concern the latest developments concerning the rule of law in Romania.”

“Both the content and the procedure of the latest changes using emergency ordinances without any consultation with the judiciary and stakeholders seem to be in direct contradiction with the recommendations of the commission,” he added.

“Romania needs very urgently to put the reform process back on track. This means going forward, not backwards, and abstaining from any steps that reverse the progress accomplished over past years.”