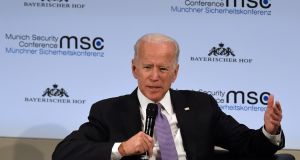 The last time Joe Biden thought about running for the US presidency, in 2016, he was in a miasma of grief about Beau, his oldest son, who died from brain cancer the previous year. Photograph: Christof Stache/ AFP/Getty Images

It’s a truism in Washington that when politicians say they’re not running so they can spend more time with their families, something else, possibly something salacious, is afoot.

But with Joe Biden, his family history is so tragic and so fraught, calculations about how a presidential run would affect his wounded clan are not code for some other problem.

Biden’s appeal for 2020 is that he comes across as a warm, blue-collar, touchy-feely paternal figure, sometimes talking too much, sometimes saying the wrong thing, like calling parts of Asia “the Orient.” At 76, he’s been through it all, and then some.

But as he prepares to present himself as a seasoned patriarch who can lead the country in a smooth, classy way, unlike the current occupant of the Oval, he must grapple with the painful reality of his life as the head of a family that has messily spilled into the tabloids, a brood that is still brooding and suffering the reverberations of 46-year-old Beau Biden’s death from brain cancer in 2015.

The last time Biden thought about running, in 2016, he was in a miasma of grief about Beau, his oldest son – the former Delaware attorney general whom Joe Biden fervently hoped might be president some day.

Grief aside, Barack Obama and his coterie of top aides did not think the vice-president was the right person to protect and extend the Obama legacy.

But there was a school of thought that, given the monumental effort it took to dismantle the Clinton machine, it would be better to move on from Hillary. Some Biden allies felt that his powerful story of rising above personal loss — his first wife and infant daughter died in a car crash just before Christmas in 1972 — could be a superpower to connect with suffering Americans and that such a raw quest would be good therapy for him.

But Obama felt differently. He could make it up to Hillary and feminist activists for hopscotching over the New York senator who might have blown out the glass ceiling in 2008.

Also, Obama and his strategists thought Biden had hit his ceiling, had his day, had too many gaffes. Hillary, Obama thought, was an impressive and loyal cabinet member who was great in meetings.

It escaped the attention of Professor Obama that a populist rage was rising, and that a multimillionaire taking a fortune from Goldman Sachs on the eve of her campaign might not suit the moment. Uncle Joe may be the epitome of the establishment, but at least the teetotaler knows how to talk to Joe Sixpack.

The president told his faithful vice-president that it was Hillary’s turn and Biden tried to accept it. Biden had known for years that the party would want to follow the first African-American president with the first woman president.

As they pushed him aside, giving him the Medal of Freedom to assuage the dis, the Obama team told reporters that Biden was too emotionally fragile to compete. As one former Obama strategist recently reiterated to me, “You’ve got to be able to make it to the end of a sentence without crying to run for president.”

Hunter Biden and the ailing Beau had wanted their father to run. They did not want a Clinton restoration. Biden succumbed to pressure and gave way to Hillary. And the rest is sordid history. Members of Obama’s inner circle say the former president realises now he should not have christened Hillary the successor, that he should have let Bernie, Joe and Hillary fight it out.

As Donald Trump’s reality-TV family took over the White House, Biden had to deal with his own family’s scandalous headlines.

Joe and Jill Biden gave a statement to Page Six’s Emily Smith about the Hamlet-like union of Beau’s widow, Hallie, and Beau’s brother, Hunter (which now seems to have dimmed): “We are all lucky that Hunter and Hallie found each other as they were putting their lives together again after such sadness. They have mine and Jill’s full and complete support and we are happy for them.”

It was understandable that, having lost so many close to him, Biden would hold the troubled Hunter tight. And he was doubtless upset about the public nature of the divorce.

Still, his statement upset Kathleen’s friends and became a running topic at Washington dinner parties, where guests worried about Kathleen being frozen out; though Joe is close to her three daughters, the new family dynamic led to awkward moments at soccer games and family holidays. (While covering the Obama White House, I got to know Hunter as well as Kathleen, who became good friends and Soul Cycle mates with Michelle Obama.)

Kathleen Buhle Biden, as she is now known, has not spoken publicly about this; she passionately pushed her father-in-law’s candidacies over the years, including the last time, when others were trying to push him out, and does not want this drama to interfere in any way.

In a statement to Vanity Fair, Hunter Biden also said his travails should not deter his father from running: “We don’t pretend that we are different from families all over America that have to face the loss of loved ones, or have to deal with the fallout of divorces.”

But not all families have to stomach Donald Trump’s low blows, as Biden will if he runs. And Biden will have to temper that Irish temper of his.