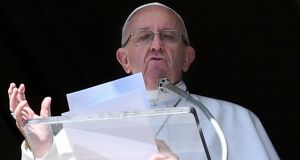 Pope Francis speaks from the window of the Apostolic Palace on Sunday at the Vatican. Photograph: Vincenzo Pinto/AFP

The Vatican is to prepare a guidebook for Catholic bishops worldwide so they “clearly understand their duties and tasks” in dealing with clerical child sex abuse cases.

Pope Francis is also to create task forces “of competent persons” to help bishops’ conferences and dioceses “that find it difficult to confront the problems and produce initiatives for the protection of minors”. He will issue an edict on the protection of minors and vulnerable persons which will apply to the Roman Curia and Vatican State.

These initiatives were announced on Sunday afternoon at a Vatican press conference by Fr Federico Lombardi, moderator of a four-day meeting there on the protection of minors in the church which had concluded hours beforehand.

Members of the meeting’s organising committee will on Monday morning speak with heads of the Roman Curia to discuss follow-up “to the proposals and the ideas decided upon during these days”.

These “first steps”were encouraging signs for “all people of goodwill who want to abolish every form of violence and abuse against minors,” Fr Lombardi said.

Pope Francis, in his concluding address to the meeting of 190 Catholic Church leaders from around the world, pleaded for the eradication of child abuse “from the face of the earth”.

At the Vatican on Sunday morning he said: “I make a heartfelt appeal for the all-out fight against child abuse, in the sexual field as in other fields, by all authorities and individuals.”

These were “abominable crimes that must be erased from the face of the earth: this the many victims hidden in families and in various areas of our societies ask for”, he said.

The “severity of the plague of sexual abuse against minors is a historically widespread phenomenon unfortunately in all cultures and societies”.

It had become, “only relatively recently, the subject of systematic studies, thanks to the change in public awareness of a problem in the past considered taboo, that is to say that everyone knew of its presence but no one spoke about it”, he said.

Looking to the incidence of clerical child sexual abuse, he said: “The inhumanity of the phenomenon worldwide becomes even more serious and more scandalous in the church, because it is in contrast with its moral authority and its ethical credibility.”

“Faced with such cruelty, with so much idolatrous sacrifice of children to God, power, money, pride, empirical explanations are not enough; these are not able to make understand the breadth and depth of this drama.”

He said in “the justified rage of the people, the church sees the reflection of God’s wrath, betrayed and slapped by these dishonest consecrated persons”.

“The echo of the silent cry of the little ones, that instead of finding, in their paternity, spiritual guides have found the executioners, will make the hearts tremble, anaesthetised by hypocrisy and power. We have a duty to listen attentively to this stifled silent cry.”

This meant it was “therefore necessary to change mentality to combat the defensive-reactive attitude to safeguard the institution, for the benefit of a sincere and decisive search for the good of the community, giving priority to victims of abuse in every sense”, he said.

“To achieve this goal, the church must rise above all ideological polemics and journalistic policies that often exploit the same dramas experienced by children in various interests,” he said.

The time had come “to work together to eradicate this brutality from the body of our humanity, taking all the necessary measures already in force at the international level and at the ecclesial level”.

“The time has come to find the right balance of all the values at stake and to give uniform guidelines for the church,” he said.