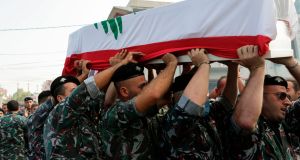 Firefighters carry the coffin of their colleague Joe Noun, who was killed in the city’s massive blast, during his funeral at the fire station in Karantina neighbourhood near the port on Wednesday. Photograph: Getty

At least 200 were killed, 6,000 injured, and 300,000 rendered homeless by a catastrophe which coincided with collapse of the country’s currency, economic meltdown and rising poverty and Covid-19 infection rates.

Lebanese anger and frustration have turned to despair by the revelation by Elie Zakhour, chairman of Beirut’s international chamber of shipping, that more than 2,000 tonnes of ammonium nitrate which wreaked havoc had been stored for six years, along with paint, paint thinner and fireworks in a warehouse reserved by authorities for flammable materials not collected by recipients.

Volunteers have largely assumed the monumental task of clearing debris and caring for victims due to the absence of national institutions and services.

Political figures and factions accused of pillaging Lebanon over the past three decades have discussed forming a national unity government of selected candidates. Having failed to halt Lebanon’s economic slide and secure $20 billion (€17 billion) in rescue funds during seven months in office, prime minister Hassan Diab and his technocratic government resigned on Monday.

Nawaf Salam, scion of a prominent political family, has been mentioned by Al-Akbar daily as a possible successor. As he is a distinguished diplomat who serves as a judge on the International Criminal Court in The Hague, the political elite could calculate that Salam would be seen as incorruptible by the public.

However, since he is said to have the backing of France, the US and Saudi Arabia, he could be rejected by protesters who want Lebanese to decide on their rulers rather than external powers, which have long meddled in the country’s domestic, regional and international affairs.

Politicians and warlords in power will not escape accountability even if they form a government with a mandate to effect change and implement reforms.

Reports that Diab, president Michel Aoun and others had been warned of the extreme risk posed by the ammonium nitrate two weeks before it detonated have strengthened the resolve of activists to maintain protests until the controlling clique has been ousted and the sectarian system of governance replaced. The slogans adopted by October’s popular revolt remain: “The people want the fall of the regime!” and “All must go!”

Writing in Middle East Eye, American University of Beirut professor Rima Majed summed up the feelings of many Lebanese: “Our money did not evaporate; it was stolen. Our revolution did not fail; it was halted. Our houses did not fall down; they were destroyed. Our lives did not end; we were killed. These are not accidents. These are crimes.”