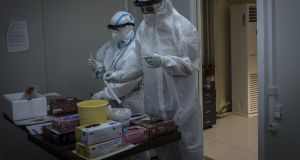 More than 20.42 million people have been reported to be infected by the novel coronavirus globally and 744,649 have died, according to Johns Hopkins University’s Coronavirus Resource Center. Infections have been reported in more than 210 countries and territories since the first cases were identified in China in December 2019.

Here are the latest updates from around the world.

Italy has on Wednesday ordered travellers arriving from Croatia, Greece, Malta and Spain to be tested for Covid-19 and added Colombia to a list of countries under a complete travel ban amid growing concern over new infections.

Once the world’s worst-affected country, Italy has managed to bring down and contain the number of infections in recent weeks, but officials are worried by a gradual resurgence.

On Wednesday, authorities recorded 481 new cases and 10 deaths, twice the levels regularly seen in June when tough lockdown measures imposed from March were being eased.

With the annual summer holiday reaching its peak, health services are bracing for a return of travellers from destinations where social distancing, face masks and other protective measures appear to have been widely ignored.

Health minister Roberto Speranza announced late on Wednesday he had signed an order requiring antibody or swab tests to be performed on all arrivals from the four countries and said there would be a ban on arrivals and transit passengers from Colombia.

“We must continue on a path of caution to defend the results we have obtained over the past months through sacrifices by everyone,” he said on Facebook.

Australia recorded its deadliest day of the coronavirus pandemic on Wednesday and the biggest daily rise in infections in three days, denting hopes that a second wave gripping the state of Victoria may be stabilising.

Victoria reported 21 deaths - two more than the previous deadliest days earlier this week - and 410 new cases in the past 24 hours, ending a run of three consecutive days with new infections below 400.

Victorian premier Daniel Andrews said that while the number of cases were trending down, the impact of the strict new lockdown measures was yet to show up in the case numbers.

“We all know that a week is not the life cycle of this virus ... and our experts remain firm in the view that this will drive the numbers down,” he told reporters.

Only Victoria and the country’s most populous state, New South Wales (NSW), reported fresh Covid-19 cases on Wednesday, with a total of 428 infections detected in the past 24 hours.

The virus has been effectively eliminated outside of Victoria and NSW.

Authorities in NSW are scrambling to trace infections linked to a new cluster at a school in Sydney, which has raised fears of more widespread community transmission than previously known in the country’s biggest city.

“We’ve given certainly a grace period for businesses, for organisations, for different establishments to step up their Covid safe plans and if they don’t do that we will have to go a step further,” Ms Berejiklian said at a media briefing.

Australia has reported just over 22,000 infections and 352 deaths from the virus, far fewer on a per capita basis than many other developed countries.

Greece reported 262 new cases of Covid-19 on Wednesday, its highest daily tally since the start of the coronavirus outbreak in the country.

The latest jump in cases brings the total number of infections in Greece to 6,177 since its first case surfaced in late February. There have been 216 deaths recorded.

Of the new cases, 85 were registered in the northern Greek city of Thessaloniki and 66 in the capital, Athens.

The increase in infections in recent weeks has prompted authorities to gradually introduce more restrictions during the peak of the tourism season.

From August 17th, visitors arriving from Sweden, Belgium, Spain, the Netherlands and the Czech Republic will need proof they have tested negative for the novel coronavirus to gain entry. The test cannot be older than 72 hours prior to arrival.

The same requirement will apply to all visitors entering Greece via land borders. A negative test is already required for passengers arriving with a flight connection from Bulgaria, Romania, the United Arab Emirates and Malta.

Civil aviation authorities on Wednesday extended a ban to flights from Turkey until August 31st and restricted flights from Albania and North Macedonia to Athens airport only.

Sixty-two new cases were reported in Hong Kong Wednesday, as authorities cautioned that the global financial hub still faced a critical period to contain further transmissions of the virus and warned residents to stay vigilant at social distancing.

Authorities said 61 of the 62 cases were locally transmitted.

Since late January, about 4200 people have been infected in Hong Kong, 63 of whom have died. Wednesday’s figure was up from Tuesday’s 33 cases.

Germany recorded the biggest daily increase in new coronavirus cases in more than three months, data showed on Wednesday, with the health minister warning of outbreaks in nearly all parts of the country due to holiday returnees and party-goers.

The number of confirmed coronavirus cases rose by 1,226 to 218,519, data from the Robert Koch Institute (RKI) showed. That was the biggest daily increase since May 9.

The number of coronavirus deaths remained relatively low, edging up by six to a total of 9,207.

“This is, no doubt, very worrying,” health minister Jens Spahn told Deutschlandfunk radio, adding that citizens had to remain cautious to prevent the virus from spreading further.

“Because we now have a lot of outbreaks all over the country,” Mr Spahn said.

“We see that due to holidaymakers coming back, but also due to all sorts of parties and family gatherings, we now have smaller and larger outbreaks in many regions, in nearly all parts of the country.”

Chancellor Angela Merkel and the 16 state governments in charge of health protection decided in May to gradually ease coronavirus restrictions, a balancing act to allow public life and business activity to recover while trying to keep the infection rate low.

The easing of measures followed two months of lockdown that plunged Europe’s economy into its steepest recession on record, though sentiment surveys and economic data now point to a quick, V-shaped recovery as long as another nationwide lockdown can be avoided.

Officials in Indonesia reported 1,942 new coronavirus cases on Wednesday, bringing the total number of confirmed infections in the country to 130,718, data from the government’s health ministry website showed.

On Wednesday morning, Russia reported 5,102 new cases and 129 deaths for the previous 24 hours.

Russian president Vladimir Putin said on Tuesday that Russia had become the first country to grant regulatory approval to a Covid-19 vaccine after less than two months of human testing, a move Moscow likened to its success in the Cold War-era space race.

The vaccine, which will be called “Sputnik V” in homage to the world’s first satellite launched by the Soviet Union, has however not yet completed its final trials. – Reuters