Three dead after train derails in floods-hit area of Scotland

Three people have died and a number have been seriously injured in a passenger train derailment on the east coast of Scotland. Video: Reuters 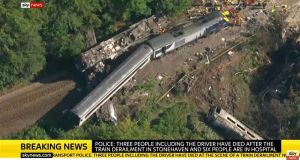 The scene of the crash at Stonehaven in Aberdeenshire. Photograph: Sky News/PA Wire

Three people have been killed after a train derailed in northeast Scotland on Wednesday, the UK’s first fatal rail crash in more than a decade.

Police said the accident took place just after 9.40am when a train travelling south from Aberdeen to Glasgow derailed near Stonehaven following heavy rain and flooding in the area.

British Transport Police said they believed that one of those killed was the train’s driver, while six people have been taken to hospital for injuries that are not thought to be life-threatening.

The incident marks the first passenger deaths on the UK railways since February 2007, when a Virgin West Coast train travelling from London to Glasgow derailed near Grayrigg in Cumbria at 150km/h, killing one passenger.

It is the first multi-fatality incident since the 2002 Potters Bar rail crash which killed seven people, and the first time a driver has died since 2004.

Pictures from the scene, near an embankment, showed smoke billowing into the air, with scores of emergency response vehicles and an air ambulance in attendance.

A rail industry source said the train fell down a “very steep” embankment after encountering a landslide on the tracks.

Network Rail, the state-owned operator of the UK’s rail network, had earlier warned of landslides in the area of the derailment and said services had been unable to operate. The company shared a video from the area showing water pouring on to the line and submerging part of the track.

The train involved was the 6.38am ScotRail service from Aberdeen to Glasgow Queen Street.

The train was a British Rail Class 43 intercity operating with Mark 3 carriages, long-serving workhorses of the train network which were built in the late 1970s and early 1980s and have since been refurbished.

“I would like to reassure the public that this was not a busy service, and from CCTV inquiries and witness statements we believe all passengers have been accounted for,” said chief superintendent Eddie Wylie.

Significantly fewer passengers have been using the rail network over the past six months due to the coronavirus pandemic.

Aberdeen, where the train originated, is still under a localised coronavirus lockdown, and the Scottish government has advised against all non-essential travel to and from the city.

Boris Johnson, UK prime minister, said in a tweet before the deaths were announced that he was “saddened to learn of the very serious incident in Aberdeenshire and my thoughts are with all of those affected”.

The Rail Accident Investigation Branch said it had launched an investigation, while The Office of Rail and Road, the independent railway health and safety regulator, said it would send an inspector to Aberdeenshire.

“We will work with the Rail Accident Investigation Branch, British Transport Police and the emergency services to investigate the full circumstances of what has happened,” the ORR said. – Copyright The Financial Times Limited 2020