Nearly half of Germans back US troop withdrawal, poll shows

Five of the six parliamentary parties in the Bundestag oppose the reduction of 11,900 US troops 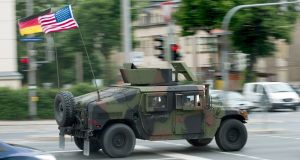 Late last month the Pentagon said it will withdraw 11,900 troops from Germany as part of a long-term defence strategy. Photograph: Arno Burgi/EPA

German voters are less vexed than their politicians by US president Donald Trump’s decision to withdraw nearly 12,000 US soldiers stationed in Germany. Some 47 per cent of Germans back the US decision to reduce its military presence to 24,000, according to a YouGov survey.

The survey found in addition that, 75 years after the end of the second World War, one in four Germans think it is time all US soldiers left bases in the country.

Just a third (32 per cent) of Germans said they were in favour of the US maintaining existing troop numbers.

Late last month the Pentagon said it will withdraw 11,900 troops from Germany as part of a long-term defence strategy. Mr Trump said he was punishing a “delinquent” Germany for consistently low defence spending, in defiance of its Nato commitments.

Of those leaving Germany, more than half will return to the US for rotational deployments in eastern Europe and around the world. Some 5,600 will be reassigned within other Nato countries, in particular Italy and Belgium.

This reorganisation, the Pentagon said, would “strengthen Nato, enhance the deterrence of Russia” and “boost the flexibility of the US military”.

Mr Trump said it was about ending decades of Germany enjoying defence by US troops at US taxpayers’ expense.

“We don’t want to be the suckers any more,” he said. “The United States has been taken advantage of for 25 years, both on trade and on the military. So we’re reducing the force because they’re not paying their bills.”

Germany’s ambassador to the US Emily Haber insisted Germany was a “steadfast Nato ally and third largest contributor to its budget”.

Five of the six parliamentary parties in the Bundestag oppose the troop reduction, apart from the pacifist Left Party.

Among the departing troops will be US Africa Command from Stuttgart to an as yet undecided new base. Also affected are US troops based in southern Bavaria and Rhineland-Palatinate, all strategic points chosen in the early years of the Cold War.

Some 30 years after it ended with the unification of Germany and Europe, the poll indicates 41 per cent of voters of chancellor Angela Merkel’s centre-right Christian Democratic Union (CDU) still want US troops in their country.

However the same percentage of supporters of the Social Democratic Party (SPD) back the troop reduction. Support for the move rises among Green and liberal Free Democratic Party (52 per cent each). Among voters of the far-right AfD and the Left Party, support rises to 61 and 70 per cent respectively.

An even firmer majority – two-thirds – want departing US troops to take with them their nuclear weapons stationed on German territory, just 130km from Luxembourg.