Israelis and Palestinians may face charges for war and other crimes 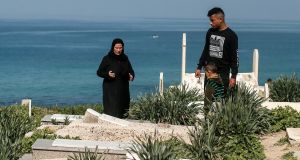 The mother and brother of Mohammad, one of four children from the extended Bakr family killed during the 2014 Israeli-Palestinian conflict, visit the victim’s grave in al-Shati refugee camp in Gaza City. Photograph: Mahmud Hams

The International Criminal Court is to investigate allegations of crimes against humanity, war crimes and rights abuses in the Israeli-occupied Palestinian territories, and charge suspected Israeli and Palestinian perpetrators.

The ruling could be a game changer. The court will investigate Israeli ministers, officers and officials as well as their Hamas counterparts in Gaza and issue international arrest warrants for those accused, who could be detained when travelling abroad.

The Hague-based ICC is to focus on Israel’s 2014 offensive against Gaza, its response to Palestinian protests in Gaza in 2018-2019, and the transfer of Israeli citizens into the occupied West Bank and East Jerusalem.

Israel’s widely criticised 50-day assault on Gaza in 2014 devastated the strip and killed 2,251 Palestinians, the vast majority of them civilians. Fighters with Hamas, the militant Palestinian group that governs Gaza, killed 67 Israeli soldiers and six civilians – five of them Israeli and one from Thailand.

Tens of thousands of Palestinians took part in mainly peaceful “March of Return” demonstrations in Gaza in 2018 and 2019, but when militants attempted to breach the fence between the strip and Israel or threw stones and Molotov cocktails at Israeli forces, they responded with tear gas, rubber bullets and live ammunition, killing 214 Palestinians and wounding 36.000. One Israeli soldier was killed and seven injured.

On Israel’s settlement enterprise, Israeli law professor Yuval Shany told the Jerusalem Post that the ICC’s ruling was “a blow for Israel”, as it allowed for an investigation of the complaint “that Israel committed a crime of ‘transfer of population into occupied territory’”.

To date, Israel has planted nearly 650,000 Israelis in the West Bank and East Jerusalem in violation of article 49 of the fourth Geneva Convention, which prohibits such transfers.

Since its founding 2002 to hold individuals to account for violations of international law with the aim of reducing abuses, 123 countries have submitted to ICC jurisdiction.

In 2015, it received the Palestinian Authority’s complaint about alleged Israeli war crimes and breaches of international law in 2015 and launched a preliminary investigation. The court waited to authorise a pre-trial investigation until 2019 after the UN General Assembly adopted a resolution that upgraded Palestine’s UN membership to observer state and reaffirmed “the right of the Palestinian people to self-determination and to independence in their state of Palestine on the Palestinian territory occupied since 1967”.

The course of ICC pre-trial investigations could depend on who succeeds incumbent prosecutor Fatou Bensouda, who is retiring in June. Irish judge and lawyer Fergal Gaynor, who has extensive experience of prosecuting war crimes, is a leading candidate.

The Palestinian Authority and Hamas – despite its inclusion in the investigation – welcomed the ICC ruling; Israeli prime minister Binyamin Netanyahu condemned it. The Biden administration is reviewing Trump-era visa restrictions and financial sanctions on court judges and staff imposed over alleged US military crimes in Afghanistan.

Last May, then US senator and now vice-president Kamala Harris signed a bipartisan letter calling the ICC’s intentions “dangerous” and saying that the US should “stand in full force against them”.