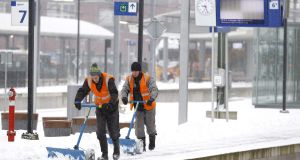 Removing snow from a platform in Zwolle, the Netherlands, on Monday. Photograph: Vincent Jannink/ANP/AFP via Getty

Northern continental Europe ground to a near halt on Monday with widespread blizzards and a wind-chill factor in many areas pushing temperatures to what felt like -30 degrees.

The region’s worst snowstorm in a decade saw up to 40cm fall in some regions of Germany, while fresh snowfall and strong Arctic gusts contributed to hundreds of car accidents.

Sub-zero temperatures are likely for the rest of the week, with fresh snowfall of up to 45cm likely by midweek.

With many lorries stuck in snowdrift on the Autobahn network, half a dozen of Germany’s federal states announced a ban on all articulated traffic until the extreme weather passes.

Police in northern Germany have ended the search for a 24-year-old woman who fell into the North Sea on Sunday. Winds of up to 100km/h knocked her from the gangway of a Danish-registered container ship in the northern port of Bremerhaven.

Police in the southwestern state of Hesse described the situation as “catastrophic” after extreme snowfall began on Sunday and continued into Monday. Germany’s meteorological service DWD warned that daytime sub-zero temperatures in the coming days will, along with sustained snowfall in some regions, lead to dangerous “extreme frost” and ice build-up.

“Clearing streets will become difficult to impossible,” DWD said in its daily forecast.

German rail operator Deutsche Bahn suspended its services across the country on Sunday, with no trains running between Berlin or Hamburg to Munich, while Dutch operator NS said it was running only a limited service across the Netherlands on Monday.

The extreme conditions complicated what was supposed to be the first day back for Dutch schoolchildren, with schools in some regions remaining closed to minimise traffic on the roads.

Trans-Europe express rail services were thrown into chaos, from the Netherlands across to the Czech Republic, where long-distance and commuter trains to Prague were cancelled. Czech motorists also faced disruption as the main highway between the Czech capital and second-largest city Brno was blocked by immobile trucks.

Health authorities in Lower Saxony said the extreme weather had slowed down distribution of Covid-19 vaccines, while police and army worked elsewhere to clear snow and de-ice vaccination tents.

Pictures posted on social media from the French alps and the principality of Andorra in the Pyrenees showed snowfall with a golden hue.

“A major intrusion of Saharan sand and dust has dramatically altered the skies over parts of Europe today,” confirmed the World Meteorological Organisation in a tweet.

Denmark’s meteorological institute has issued an extreme weather warning, with up to 30cm of snow forecast in some areas on Tuesday and Wednesday.

Over the weekend in Copenhagen, police charged 18 people with walking on frozen lakes in breach of rules that require ice to be at least 13cm thick before lakes are open to pedestrians.