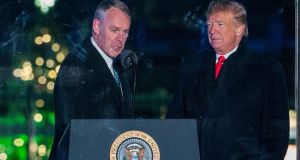 Former US secretary of the interior Ryan Zinke with President Donald Trump: Mr Zinke has been mired in allegations of political and ethical misconduct since he was appointed in 2017. Photograph: Erick S Lesser

The personnel churn at the top of the Trump administration continued over the weekend as the secretary of the interior was forced to resign, and President Donald Trump named a new chief of staff.

Ryan Zinke, the former Montana congressman, had been mired in allegations of political and ethical misconduct since he was appointed to the post in 2017. On Saturday, Trump announced his departure on Twitter.

“Secretary of the Interior Ryan Zinke will be leaving the Administration at the end of the year after having served for a period of almost two years. Ryan has accomplished much during his tenure and I want to thank him for his service to our Nation,” he said,” continuing in a second tweet: “The Trump Administration will be announcing the new Secretary of the Interior next week.”

Zinke is the third senior member of the administration to be dismissed by the president since last month’s midterm elections. He fired attorney general Jeff Sessions the day after the election and confirmed John Kelly’s departure as chief of staff earlier this month.

Zinke’s departure had not been unexpected. He was plagued by allegations of unethical ties with industry and dodgy property deals in Montana.

Secretary of the Interior @RyanZinke will be leaving the Administration at the end of the year after having served for a period of almost two years. Ryan has accomplished much during his tenure and I want to thank him for his service to our Nation.......

.......The Trump Administration will be announcing the new Secretary of the Interior next week.

It is understood that Mr Trump had been mulling his future in the weeks following the mid-term elections amid concerns that the incoming Democratic majority in the House of Representatives could turn their oversight powers to Zinke.

Senior Democrats on the natural resources and energy committees had already pledged to tighten their scrutiny of Zinke, particularly over his alleged role in a $300 million electricity contract signed between Puerto Rico and a Montana company in the wake of Hurricane Maria.

The post of secretary of interior involves responsibility for the country’s public land and natural resources. Zinke had been harshly criticised by Democrats and conservationists for advocating the reduction of the Bears Ears and Grand Staircase national monuments in Utah, moves that are now the subject of various court cases.

Zinke’s deputy, David Bernhardt, who will take over in an acting capacity as secretary of the interior, is a former fossil fuel lobbyist. He is believed to be under consideration to replace his former boss permanently.

Separately, Trump put an end to intense speculation as to who would become his next chief of staff as he named Mick Mulvaney for the post – at least on an acting basis. “For the record, there were MANY people who wanted to be the White House Chief of Staff,” Mr Trump tweeted on Friday evening amid widespread reports that he was finding it difficult to find a candidate for the position. “Mick M will do a GREAT job!,” he said. He also thanked John Kelly for his service, describing the four-star general as a “great patriot”.

Mulvaney, a former congressman for South Carolina, has strong links with Ireland and has been centrally involved in Ireland’s efforts to secure access to the E3 visa programme which is currently only available to Australian citizens.

The Daily Beast unearthed a video recording showing Mulvaney calling Trump “a terrible human being” in 2016 before the election, but that he would vote for him anyway. “Do I like Donald Trump? No,” he said, adding “We have perhaps two of the most flawed human beings running for president in the history of the country.”

Mulvaney is Trump’s third chief of staff in two years. According to recent research by Brookings Institution, the Trump administration has experienced the highest staff turnover of any administration in history, with more than 80 per cent of the most senior-ranking White House staff members departing.